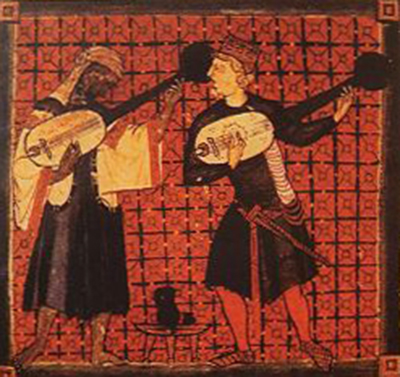 Despite his importance as the first Muslim intellectual to make use of ideas from the Greek philosophical tradition, we don’t know much about the life of al-Kindi. We do know roughly when he lived (the ninth century CE), that he was descended from a companion of the Prophet, and that his father was governor of Kufa. Beyond that we have only a few anecdotes about him. But one of them, preserved for us by the the historian al-Qifti, is well worth recounting. It seems there was a rich merchant who had taken up against al-Kindi and went about slandering his name. Then the merchant’s son fell ill, paralyzed and unable to speak. It was both a personal and financial blow, because the son was in charge of keeping track of the books for the merchant’s business and vital information was known only to him. After consulting every doctor in Baghdad, the merchant turned in desperation to al-Kindi. The philosopher knew just how to help. He instructed his students to play their lutes over the young man, who immediately began to recover. As music continued to be played in the background, he was even able to relay important information about the family business. But as soon as the music stopped, the boy collapsed again. Al-Kindi regretfully told the father that the trick could not be repeated: “He has exhausted the portion of life that God has allotted to him.”

There’s a lot in that story. It gets across an ethical message, with the wealthy and malicious merchant being punished even as al-Kindi’s forebearance marks him as a moral paragon. And the ending of the tale emphasizes the limits of human ingenuity in the face of God’s plans. But what I want to focus on is the marvelous, even magical power ascribed to the playing of music. While this may seem to be a mere ornament to a legendary tale, al-Kindi’s own works likewise suggest that music may have such powers. In treatises he composed on this subject and, in particular, on the construction and powers of the lute (or oud), al-Kindi observed that music can have astounding effects on those listening, including medically salutary ones.

Of course, we’re all familiar with the way that a jaunty ditty may cheer us up, a dirge make us serious or sad. But al-Kindi goes further. He believes that the four strings of the lute correspond – or perhaps we should say “resonate” – with other fourfold systems in the world around us. These include the four elements earth, air, fire, and water, the four winds, the four quarters of the heaven, and also the four “humors,” the fundamental substances supposed to constitute the human body: blood, phlegm, yellow bile, and black bile. We don’t talk about them much anymore, or rather we do but without knowing it. When you call someone “sanguine” or “melancholy” you are referring to the personality types that used to be linked to blood and black bile, respectively. For al-Kindi, the inventors of musical instruments were at least implicitly in touch with the structures that govern the whole cosmos. He suggests that other cultures had different numbers of strings on their lutes because they had different ideas about these structures. Indians have a one-stringed instrument because they believe in the unity of all reality (he’s thinking of something like the monism of the Vedanta school, presumably), whereas two strings are used in Khurasan, where people thought that all reality derives from a duality of principles.

One century on, we find the mysterious group of authors called the “Brethren of Purity” putting forth similar ideas in an epistle on music, one item in an encyclopedic collection of such epistles dealing with all branches of philosophy and religious learning. The Brethren agree that music can affect people deeply, even somehow reaching the immaterial soul. This despite the fact that they know sound to consist of physical vibrations in the air. They compare the sound radiating from a source to a ball of molten glass being blown into a sphere by a glassblower. Like al-Kindi, the Brethren were looking back to an ancient tradition that understood the cosmos and all its parts in mathematical and musical terms. This, of course, was the tradition called Pythagoreanism, responsible for giving us the idea of a “music of the spheres.”

The examples given for the effects of music by al-Kindi and the Brethren are a mix of the plausible and the fanciful. We probably don’t think that a young man can be temporarily revived from his catatonic state by playing a lute over him, but when the Brethren say that calm music can be used to stop a drunken brawl they have a good point. Today, classical music is piped into some public places for precisely this reason. Similarly, what we might call the “scientific theory” underlying this whole conception of music and its causal powers is a mix of the spurious and the true. The body does not consist of four humors, and the periodic table has more than four elements on it. But al-Kindi and the Brethren, and the Pythagoreans before them, were right to suppose that reality has mathematical structure.

This is actually a matter of deep philosophical interest. Mathematics is usually taken by philosophers to be a paradigm case of what they call a priori reasoning, which means that it is done without any recourse to experience of the physical world around us. You don’t need to do empirical research to find out that ten times ten is one hundred. The Pythagorean theorem was not proved by measuring real physical triangles. Yet the mathematical truths that we discover through pure thought turn out to structure reality. This is why if you venture into a Physics Department, you’ll see mathematical formulas scrawled on all the whiteboards. Al-Kindi would approve, not least because, as his experience with the merchant’s son shows, it’s vital to write things down.

Peter Adamson is Professor of Late Ancient and Arabic Philosophy at the LMU in Munich. He is the author of two monographs on early Arabic philosophy, the book series A History of Philosophy Without Any Gaps, and numerous articles on figures ranging from Plato and Aristotle to Averroes and Fakhr al-Din al-Razi. He has also edited and co-edited numerous books, including The Cambridge Companion to Arabic Philosophy (2005) and Interpreting Avicenna: Critical Essays (2013).
Featured Artwork: SPAIN: MUSIC, 13th CENTURY. A Spanish Muslim (left) and Christian strum on citterns, a type of lute. Manuscript illumination, 13th century, from the ‘Cantigas de Santa Maria.’