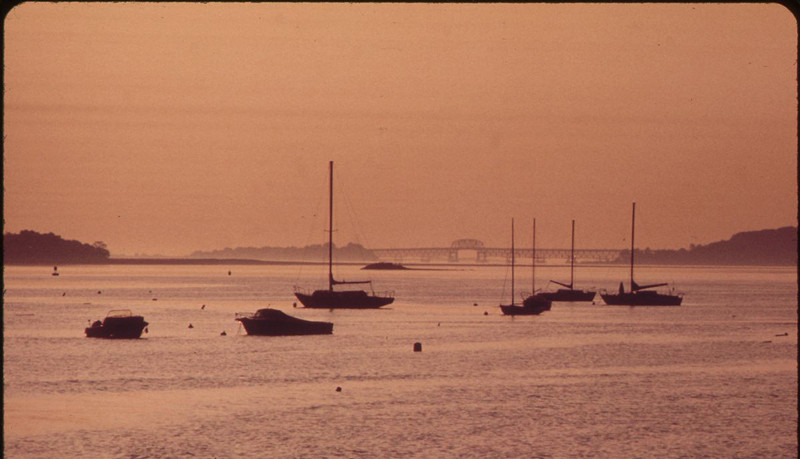 There’s a big red photo album tucked away in my parents’ bedroom. On late afternoons, the yard in long shadows, the sunlight shallow, I used to sneak into their room and pore over the photos for hours, getting lost in the stories that played out in my mind’s eye.

In my favorite photo, Mum is wearing a pair of faded Levi jeans; she and my Dad are sitting on a metal fence in front of a dirty Boston Harbor. Dad’s leaning forward holding a beer, looking at her face, and she’s pitched back, a laughing smile frozen for all time. What is she laughing at? I think. What did it feel like to be her in that moment in time? I never get tired of looking at that photo.

When I was a little kid, my Mum would come home from work, bringing the smell of the hospital with her. It was a mix of Werthers originals, sterility, anesthesia, baby smell and the stale air of pumped-in heat. I smelled it always, on her clothes and in her hair, as she hugged me. Her pale blue scrubs were worn and soft, and as I plunged my nose into her stomach, breathing her in, she folded her freckled arms around my back.

Even at 7 o’clock, a kind of weariness emanated from her, but I never realized it when I was young. Instead, my three siblings and I babbled on around her. I never missed out on an “Elle-belle!,” and a kiss on my head, or her rapt attention on whatever held my seven year-old interest.

Back then, some mornings I’d watch her sit still, trying my best to do the same. The Maine winter light streamed in the front windows of our sunroom, falling in parallelograms across the rust-red tiles, catching and suspending dust in the air.

In her meditation, she sat cross-legged on the threadbare rug, her eyes closed, sometimes flickering with the intensity of her focus, yet a calm serenity lay quiet on her face. Her hands rested palm down on her knees, pretzeled beneath her, and wrapped in faded bluejeans. After a while, I’d lose interest in that quiet box of light, my mother’s stillness, and go back to whatever my brother and sisters were doing. But lately, those memories have meant something different.

Last summer, my younger brother, Kyle, lost his balance long-boarding down Mosher Hill, crashing at its bottom. His un-helmeted head smashed and scraped across the hot Maine asphalt. According to the friend he was with, he was speechless and fell unconscious for “just a few minutes.”

Thirty minutes later, he was rolled into the emergency room at Franklin Memorial Hospital, the same hospital where Mum worked. Twenty minutes after that, he was airlifted to Lewiston, Maine. And completely sedated, brought into the ICU at Maine Medical Center. His brain was swelling. And wouldn’t stop for four days.

In the months that followed, my mother barely left his side. She slept on a cot the nurses brought into the ICU. She gave him Reiki. She started meditating again. She finally learned to use a cell phone, and talked to everybody. The floor’s doctors and nurses knew her, and checked in on her over the course of Kyle’s extended stay.

Now when I look at my mother, she’s always weary. Now the smell of the hospital isn’t so nostalgic—it’s biting and cold in my nose—a harsh reality instead of a warm kind of nostalgia. Now, an intense focus in her eyes rarely goes away. She isn’t soft the way I remember her when I was seven. The lines on her face are harder, and the look in her eyes darker. And now when she laughs, it’s usually out of relief.

Kyle eventually woke up from his coma, and Mum stayed with him, unless explicitly told not to by someone with authority. Now she’s just as gentle and patient with her broken 19-year-old son as she was when he was a kid learning to read. Now, as he’s trying to remember my name, let alone who I am, my mind springs back to an image of Mum hovering over him at eight-years-old at the kitchen counter, gently coaxing words out of the scramble in his dyslexic brain. The doctors tell us he’s expected to make a full recovery, but what that means after a severe traumatic brain injury, we don’t know.

A few weeks ago when I was home, I found myself up in my parents’ room, looking through the old, red, photo album again. It practically fell apart in my hands. But the picture is still there, and Mum’s smile is still frozen. Now it looks so different.

She’s about my age in the picture, and I so wish I could meet her back then. Back before so much life happened, before her eyes changed, and the lines of her smile were still and soft.