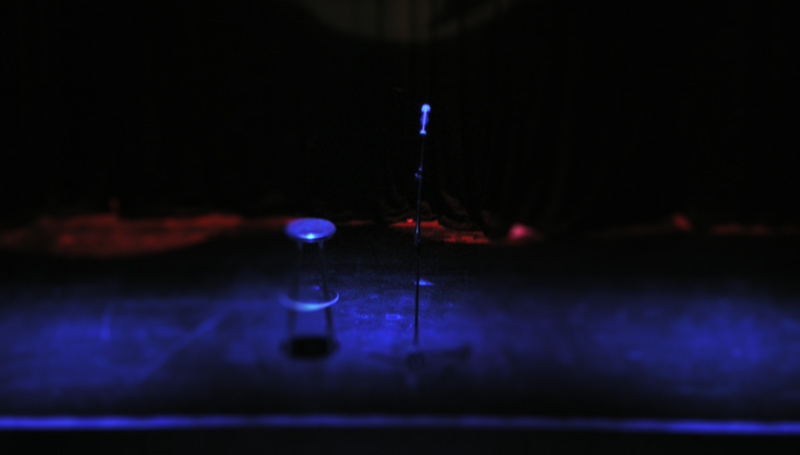 “Do you have any idea how much weed I smoke with your mom?”

The room breaks into laughter. Will basks in his punchline, soaking up the spotlight. He saunters across the stage smiling, his eyes down, as if his next joke is written out on the floor. He stops and winces, pointing up at the lights glaring down on him.

“I’m Irish Catholic, if you can’t tell by the burn I’m getting right now.”

Laughter falls from the audience, while beer and wine seeps from their pores. It’s 8:30 on rainy night in Boston, and the underground bar is filled with people ready to laugh and drink, but maybe not as much as they expected to, on both fronts.

Ten years ago, on a summer night, Will Noonan was sitting at the back of a bar in New York City. Following in the footsteps of Bill Burr, Amy Poehler and Steve Carell, Will left Boston for New York to pursue a career in comedy.

On that night, the June air was dense and sticky, like the floorboards he nervously tapped his foot against. He was at his first open mic, and his name was about to be called. His beer was so weak it didn’t stand a chance against the anxious fire in his stomach. He needed something stronger–something to contain it.

A few seats away, a friend’s gin-and-tonic beckoned him. He seized the glass. The liquor burned his throat and flushed his cheeks. Damn, that should do it, he thought, as he slammed the glass down, the gin biting the sides of his mouth.

“Sorry,” Will said to his friend, holding up the empty glass. “I’ll get you another one later.”

“Up next,” the announcer called, “Will Noonan!”

Will’s mouth was dry, the back of his neck was wet, and he remembers, his Richard Pryor t-shirt clung to his chest. Trudging to the elevated stage, his boots felt heavy. As the spotlight settled on his face, for the first time, he took hold of the mic.

Now, when Will talks about becoming a comedian, he finds it ironic, a novelty.

“It’s kind of hilarious that I became a comedian,” he says, “because I was all about that serious method acting thing.” Will continues, “When I was little, I wanted to be Bill Murray.”

As the story goes, when Will was a kid, he wanted to be a Ghostbuster, like Peter Venkman, but when he realized Peter Venkman was played by an actor–Bill Murray–he decided that’s what he’d be instead. His passion for acting continued throughout his childhood, his high school years, and ultimately led him to the American Musical and Dramatic Academy in New York City.

“I moved to Manhattan two months before 9/11. I was 18 years old in New York City… it was like 12 hours of acting classes a day. I was in class when the attack happened. As horrible as it was, it brought everyone together. It was such a crazy thing.” Looking down, he breathes in, as if he’s about to say something, then lets the moment rest.

“It was kind of a weird way to be freed out into the world,” he says, his dark brows pulling together.

For Will, 9/11 was like some kind of sick initiation into adulthood. He took it as a sign, that for his time in New York, he would not be afraid. Rather, he would thrive. He did well academically, as well as his studies in acting and performance techniques. When he wasn’t in class, he was auditioning. A year passed, and then another, and then it was 2006, and he landed a role in an off-Broadway play.

One of his college friends had moved out to Los Angeles. after scoring a role in Power Rangers, and when he heard of Will’s move west, he offered to set up a meeting for him with his agents. Will went into the meeting with new-found confidence and a brand new t-shirt, hoping it would be his big break.

However, once there, Will realized the agents were not meeting with him, for him, but doing his friend–their client–a favor. As he left the meeting, an agent stopped him and said, “You’re kind of funny, have you ever thought about doing stand-up comedy?”

“Nah,” Will said, “I kind of think of myself as an actor.” Will laughs, remembering this.

After that meeting, Will noticed that was all he heard: “You should try stand-up comedy!” Or, “Why don’t you do stand up?” Then, after months of no bookings, he asked his friend for advice.

“I was bitching to him about how I wasn’t getting any acting work, when he said, ‘You should do stand-up.’ And I was like, maybe…how do you start?”

The New York comedy scene is easily the most thriving and largest in the country. So, to make the connections and money he needed to sustain a life as a comic, Will knew he’d have to leave L.A. and return to the city he’d just left just six months ago.

His move back to New York was easy; finding a job as a bartender was easier. At the karaoke bar he worked in, he served drinks and wiped down tables, while drunk bachelorettes and college kids belted out “Africa,” or “I Wanna Dance With Somebody,” or “Purple Rain.” Soon, he became the “Karaoke DJ,” introducing the singers, and between performances, putting himself, and his act, on stage.

“I would be having really boring nights,” he remembers, “and would just joke and make fun of people in the crowd to entertain myself. That’s when I started to think maybe I could do stand-up, cause I would kill sometimes.”

One night, a couple asked Will where he performed stand up. He said he didn’t–they raised their eyebrows in surprise. They told him they’d come see him, “all the time,” if he performed.

“This was when I started to think maybe I could do stand up,” he says with a spark in his eyes. “I was like, alright, I’m just gonna do this.”

Outside the small club, Boston is masked by a low hanging, grey rain. Slowly, people begin filling the bar. Will sits in the back room, his hands wrapped around a cup of coffee, “which now,” he says, “is his pre-show ritual.”

“Espresso,” he laughs, holding up the coffee, “and I do a visualization about how it’s gonna go.” Will explains that no performance ever really goes the way he expects or wants it to. “You either kill or you bomb,” is how Will puts it. Or, “You’re floating somewhere in grey area of mediocre, [sometimes pity], and tepid chuckles.” Will’s neon pink and green tennis shoes shift on the barstool. He says the worst for any comic is the “Check-Spot.”

“It’s a shitty time when you’re up there and the checks come out,” he says. “All of a sudden, the audience goes from paying attention to you, to ‘What’s 12%? of this check?’ Usually,” Will explains, “these ‘spots’ are given to the newest comics, so while no one’s paying attention, they put somebody on who sucks.” He laughs, takes a sip of his espresso, which some time ago, would have been vodka or gin. His pre-show ritual then, before getting sober, was downing shots of fireballs.

“The first few years [doing stand-up] were really fun. That was kind of like college for me.” He runs a hand through his unruly brown hair, shakes his head and smirks. “It’s the easiest gig in the world to wake up hungover, and realize it’s been five years, and you’ve have made no progress,” he says, with a twinge of dry humor in his voice.

“It’s a party! It’s fun, you’re around fun people, free booze… that was what happened to me–I kinda just got caught up in it.”

One night, working at the karaoke bar in New York, the manager said, “So you’re good for New Year’s Eve right?” Surprised, Will said, “You’re already scheduling that? We did New Year’s Eve like a month ago.”

“No,” the manager huffed, “it’s two months from now.” Will froze in disbelief. How had the last ten months gone by? he thought. It was like the world’s worst blackout, and he had just woken up. The muted bass, pumping from bar’s speakers, became the only sound in his head, in the room. His eyes shifted nervously around the bar, landing on people he’d either slept or drank with, or both. The manager cleared his throat.

“So,” he repeated, “You’re good?” Will nodded. His mouth said yes, but his head said, I need to fucking get out of here. It was 2007. Soon after that New Year’s eve, he stopped drinking and moved back to Boston.

“In New York it’s usually ten- minute spots, but in Boston I was getting 30-minute spots. It was right around the time I quit drinking, and I felt like I didn’t know anything. You can only get so good ten minutes at a time. When you’re doing longer sets, that’s when you start to figure out who you are, your voice,” Will says this, shifting on the leather bar stool. He shakes his head and looks around the room.

“Boston really is a community. When I came back from New York, I was like, ‘This is really nice.’ Boston was my fantasy of what I thought being a stand-up was like. I mean we have a softball league, and we’re all friends. We work a lot to help each other.”

After he quit drinking, the long stretches between shows became lonely and vulnerable times.

“The only time I was talking to people was at the club at night. The rest of the time, I was alone all day. When you don’t drink, you don’t go hangout until late, and by the end of it, I was starting to crack a little bit.”

Although his comedy career was beginning to take off, scoring spots on MTV and performing at Gotham Comedy Live, the comfort he felt on-stage was missing from his life off-stage.

While his life had settled, and he was sober, he craved human connection, and that’s what Boston gave him–a community and a family. In Boston, he says, he saw how everyone in his circle realized how special their job was. And rather than downing fireballs and hooking up with random waitresses, Will now spends his weekends podcasting–Highpathetically with Will Noonan–writing new material, and playing softball with his colleagues.

According to the online magazine The Improper Bostonian, and anyone who watches Will’s sets, he is one of Boston’s “fastest-rising comedy stars.” He knows where he’s been, and where he’s going.

“I think I’ve been successful, because I’ve always tried to be kind. I think I’ve had a lot of success in this business from not being too much of a prick. It gets you pretty far.”

And he has come far. Will thrives on the stage, but the connections he’s made throughout his career is what keeps him grounded and solid. He makes people laugh until they cry, and brings a sense of comfort and personality to the stage and his stories. He might “smoke weed with your mother,” but he’ll make you laugh about it later.

Chloe Southern is an 18-year-old singer-songwriter who grew up in Boulder, Colorado. She attends Berklee College of Music in Boston, where she is studying Songwriting and Recording & Production. She has always had a passion for writing, whether it be writing a narrative or lyrics. She is inspired by great writers, like her father and grandfather. You can find her music soon on Spotify and SoundCloud @ChloeSouthern.