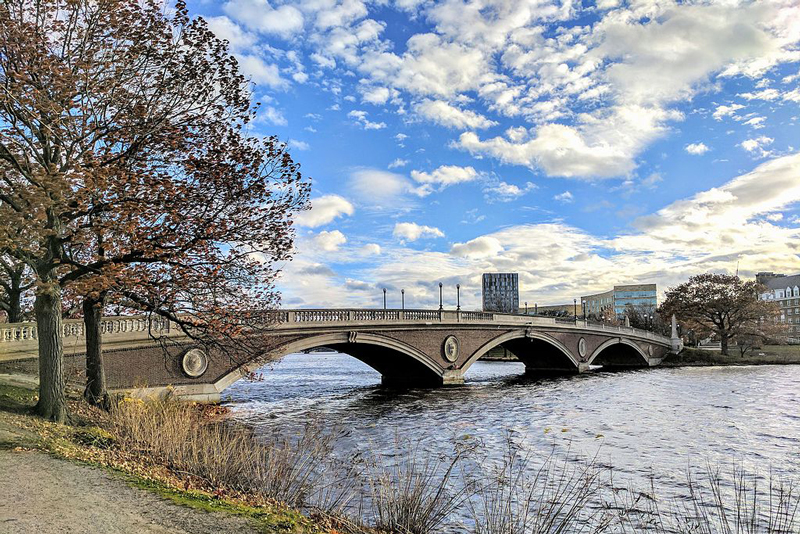 for Aurelie and Leah
With the mast up
while wheeling the boat
out from the yard,
by the sandy shore
to launch as if for
the first time, sun
bright, sky light, wind
half brisk, a new
adventure on this wide
river, summer, no
one knows what’s
in store, not unlike

a walk I took with
two French girls north
of here, across Cambridge
and Harvard after a morning
of grey rain, then past
noon the sky half clear,
sun breaking through, air
cool, spring, we walked to
“Mt. Auburn Street” as
Leah asked, “To see The Carpenter Center;
it’s designed by a French architect,”
she wished to see, and ascending
that long, first low elevated ramp
our steps and spirits lifted,
half turning, smiling
talking, looking up and back
then later below under trees
a sunshower we crowded close
the umbrella up, then down
to the Charles River, another
river Aurelie we three, Aurelie
and me and she ascending
the curving Weeks Footbridge,
then at the apex Aurelie walked up
close to me, quietly asking, as
a sculler rowing below our feet
suspended, “What river is this?”
“The Charles, the Charles River.”

Then later back toward the Square
then across Mass. Ave. again,
then winding alongside the brick
wall around the Yard to where
they could catch the No. 1 bus,
the same bus we took after
breakfast; they had “to get back;
we’re leaving today,” Leah said,
and we stood and waited with
others in jackets until
the bus came up tall before
and beside us, and then Leah,
shorter than Aurelie walked
up toward me even closer her
small hand right by my waist,
for me to hold while saying,
“Thanks for showing us around,”
and then they were turning
away and ascending the steps
as we were saying “au revoir”
and I could see them standing
by the half open bus windows
waving and smiling “au revoir.”

Daniel Picker, is the author of a book of poems, Steep Stony Road (Viral Cat Press of San Francisco 2012). His poems appear in Sequoia: The Stanford Literary Magazine, Elysian Fields Quarterly, Vermont Literary Review, Soundings East, Folio, Ireland of the Welcomes Magazine, Rune: MIT, and The Dudley Review at Harvard, where he was awarded The Dudley Review Poetry Prize. His essay on studying with Seamus Heaney at Harvard, “Eat Your Good Lamb” appears in The Oxonian Review of Oxford University, where Daniel studied after Harvard. Daniel’s prose appears in Harvard Review, The Georgia Review, Poetry (Chicago), The Sewanee Review, The Philadelphia Inquirer, and other magazines and journals.
Featured Artwork:
Dariusz Jemielniak (“Pundit”), CC BY-SA 3.0, via Wikimedia Commons