Words and Music by Cornelius Eady

There’s a moon above the pines,
But the sky is poison
There’s a list of the forgiven,
But baby, you’re not on it
Jesus shot the bullet
With your name upon it

It’s so hard to watch one’s step
When it’s open season
So tough to think things through
When there’s no reason
Ask the boss a question,
It’s a song of treason

Note:
Written the evening before I moved back to New York, after living and teaching seven years in Missouri. “Misery” is one of a number of nicknames for the state.

Oh, The Passage was a cruel
And heartless place
Like a mirror
That swallows up your face

For the names who jumped
And drowned
At sea

For the cargos robbed
Of their yet-to be

There were cities
That had a golden rule:
Catch a negro in the water
You had to drain the pool

Simone rises
From the water
She’s re-writing all the books
And she’s faster than all
The time it took.

For every theory
That got pulled down
For all the assumptions
That had to drown.

Note:
This song was written for the swimmer Simone Manuel, an African American woman, who won in a recent Olympics, and seeing her win reminded me of all the stories I’d heard about black people and water—how, as my sister told me when we were kids, the reason black people can’t swim is because of slavery, our being dragged here in ships against our wills, across the ocean, and also how, during Jim Crow, if a Black person was caught at a public pool even sticking a toe in the water, the pool would be emptied, drained, then cleaned with bleach. Watching her rise out of the pool made me think she was winning more than a medal that day.

They shot me
For a question
While I held
My child

My black skin
Was resisting
In a cop’s mad eye

They shot me
For impatience
While I held my kid

Like a monster
From a swamp
Rising from the Id

Surrounded
Defiant
Look at what they did

My soul and
Gunpowder
Rising in the air

My assumptions
And my boy
Lying wounded there

My black skin
Was poison
Was a losing hand

Oh people
Good people
See what they have done

Took my name
And respelled it
As the crazy one

Bring a sharp axe
To the mountain
Tear that mountain down

Don’t bury me
Plant my story
Like a seed in the ground.

Note:
For failing to respond to a traffic summons, police tried to raid the home of Korryn Gaines in Randallstown, Maryland, to serve a warrant which led to a standoff, then a police shooting that killed her and wounded her 5-year-old son. She was holding her son when they shot her. 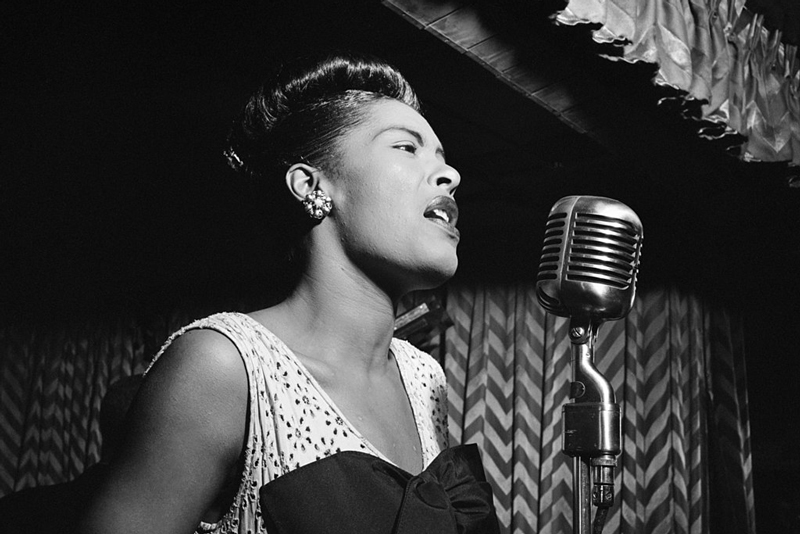 There is a song that Billie Holiday sang,
Concerning trees, she didn’t write it, but
When she sang, when she opened her mouth
She blew a sickening wind; ash, rope, the lowing
Branch-blacken fruit. It was Southern pitch, particular
To that soil. When she sang, you’d feel her fabric
Bleed, unjust notes turning flesh to butter, unscrewing
The cap between here and void, all sparrow and magpie
Calls, polluted. She’d sing this, night after night,
The last thing you’d hear before you’d drain your glass and walk
Back into the world, your city, your block, trees thrumming
Rough bark in an evening gown. Here ya go, the bad Gardenia sang,
Here’s how we rise through strangulation. 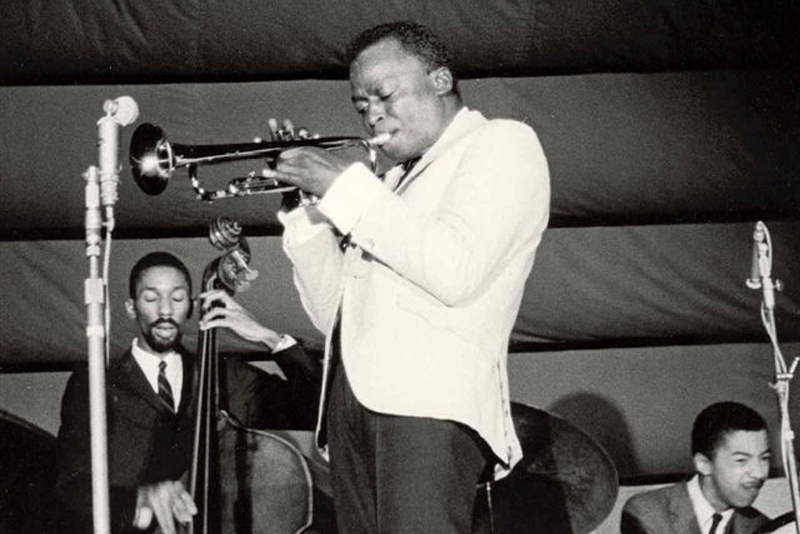 Say those folk songs, sing these evening birds,
Winding up their day, waving hi, sleep, in drowsy notes
To the dropping light, or perhaps a way
To pin their last known position before dawn:
I am here, on the third branch of the poplar,
I am here, thick in the rosewood hedge; I am here.
And I’m sorry I missed my friends phone call
When our friend died, he was carrying that man’s
Shape nested in his throat, and wanted me to call
Back through the darken afternoon, wanted me to
Claim the winged absence, to hear my
Caw. Do you wish to know how Black Men grieve?
Open your ears, then lean out the window:
Al Young’s gone. 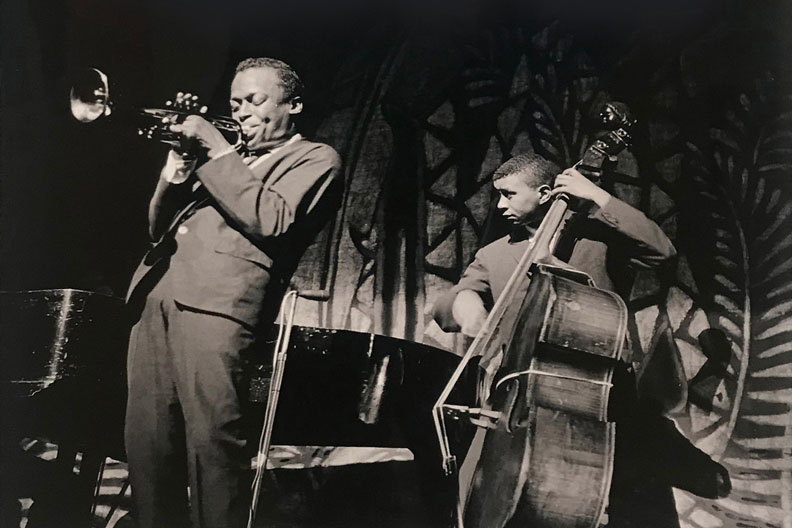 My friend is writing about
The first time he listened to
“Kind of Blue,” by Miles Davis,
And I tell him, yes, I bet everyone
Has a story, kind of like their
First kiss-how did it happen,
Where were you, on which of
Your younger days did
Paul Chambers’ bass first lick your ear?

Did you first think you didn’t want
Anything to do with that crazy
Stuff, no words, no verse/chorus,
Music for sunglasses and cigarettes holders,

Did one of your friends, a convert,
Drag you to the stereo, fired up
By the sight of a world, wider
Than the narrow, invisible rails
You were running on?
The record is famous for this,
The record that readjusts your
Opinion, and you pause, the needle
Has hit a new groove; on which
Of your younger days did the afternoon
Simmer down, and that smoothness
Called out to you, and then
Everything else? 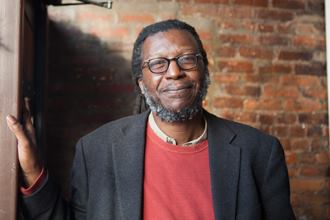 Poet and cofounder of Cave Canem, Cornelius Eady has published more than half a dozen volumes of poetry, among them Victims of the Latest Dance Craze (1985), winner of the Lamont Poetry Prize from the Academy of American Poets; The Gathering of My Name (1991), nominated for a Pulitzer Prize; and Brutal Imagination (2001), a National Book Award finalist. Hardheaded Weather: New and Selected Poems appeared in 2008.

Brutal Imagination includes a theater sequence that responds to the notorious 1994 incident in which Susan Smith, a white woman from South Carolina, claimed that an African American man had kidnapped her children. The FBI searched for the man until Smith confessed the truth: she had invented the man and had drowned the children. Eady’s sequence, which creates a detailed persona of the imaginary suspect, was adapted into an off-Broadway play that won the Newsday Oppenheimer Award. Eady also collaborated with Diedre Murray on a libretto for a roots opera, Running Man, based on his poems, which was short listed for the Pulitzer Prize in Drama.

Music is a central theme of Eady’s work, along with family and the challenges unique to the African American experience. Eady is also a singer and songwriter, writing and recording songs with both his rock band/collective, Rough Magic, and his folk Trio (Eady with guitarist Charlie Rauh and Lisa Liu). Eady’s songs tell the story of passing time, the Black American experience and the blues in the style of Folk & Americana music. Cornelius Eady Trio has performed at Smithsonian National Portrait Gallery, AWP Conference, Peabody Essex Museum, and Hill-Stead Museum and recorded at Sun Studio in Memphis, TN.

Eady has received grants from the National Endowment for the Arts, the Guggenheim Foundation, the Rockefeller Foundation, and the Lila Wallace–Reader’s Digest Fund, and holds an honorary PhD in the Arts (2010) from the University of Rochester. Eady was also awarded the Paul Engle Prize, (Iowa City/Unesco, 2019), the Phyllis Franklin Prize (MLA, 2019), the Literarian Award from the National Book Foundation, (2019) and the Elizabeth Kray Award from Poets House for service in the field of Poetry (2008).

In 1996 Eady and poet Toi Derricote founded Cave Canem, a nonprofit organization that supports emerging African American poets through a summer retreat, regional workshops, a first-book prize, annual anthologies, and events and readings across the country. In the Fall of 2021, he will join the faculty at the University of Tenn./Knoxville, as Professor of English, and the John C. Hodges Chair of Excellence in Poetry, a position last held by US Poet Laureate Joy Harjo.