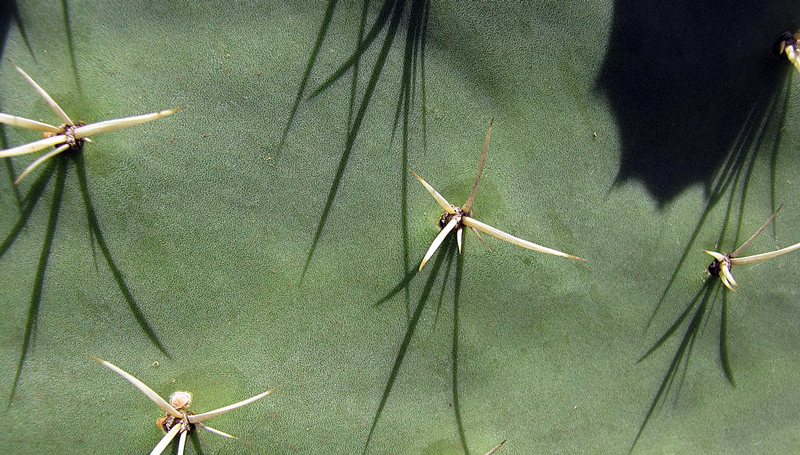 These poems are excerpted from a series in progress currently titled “Alva and the Beast.” This project, through its central character Alva, explores tropes of passion, longing, loss, and mortality through the lens of nature and technology—and how these two forces, increasingly intertwined and blurred in contemporary society, can challenge, generate, and define narratives of self as well as our relationships with one another.
Alva On Getting Dumped in the Desert
It was the last home she’d chosen
for herself, though the air gave her
nosebleeds: blood suddenly on the
sofa pillows—a few drops that would
never wind their way back to the heart.
But still. The air made her bleed.
The desert sky a low ceiling. The altitude
of the city higher than the mountains
of her hometown, where lush trees
clambered up the slopes. When he’d taken her
to the desert for the first time, she’d reached
to pet a prickly pear that grew from the sidewalk
like a balding animal. Dozens of hair-thin
needles impaled in her skin, too tiny to pull free.
Shaking his head at her idiocy: “Why in the world?”
And Alva replying: “they had looked soft.”
You might think this is a metaphor for the worst
of love. For the wrong men that made
her right. But it’s not. He knew the remedies
of the region, and in the bathroom of their rental,
had put down the lid of the toilet to be eye level
with her wounds. Her hand was cupped in his
as he unspooled the Scotch tape that would yank
the needles out, and she would know in that moment
there was no one else. For years it was truth
until it wasn’t. Someone more beautiful,
though he didn’t have to say it. She knew it
already, burning, as they stood on the balcony
of their condo whose walls were made of glass—
whole rooms in which they couldn’t hide
from the desert, and so, stepped into it.

first appeared in New Madrid
Alva and the Swell
She opens the window
for the rain and tries
to sleep, but the faces of all the men
she’s lost
and loved collide against her mind
just as her thoughts surge
forward enough to break,
just as the room begins to flatten—
not because she can see it flatten,
no, for she’s obedient
in performing the rituals of sleep
even when it won’t
come, like a lover backing off to change
position, unaware that he’s just
ruined everything
he’s managed to build.
Try again, she says. Her eyes
press shut. The waking mind
a room she knows sleep could both
fill and unhinge. But every
sound now
is larger.
Beyond the rain’s static,
a truck
slams into a pothole.
She knows the place,
its pocket-sized
abyss: the jolt always arrives upon
landing and the injured leap
back to the surface, like coming up
for air, the way it stuns to suddenly feel one’s dumb
body again, its arbitrary edges. She is keeping
her eyes shut, dammit, but she can
almost see the driver
a man, no doubt, probably a bit drunk.
She can almost hold his face in her hands, can almost
laugh at his curses— her longing to sink
that desperate, to push, as they say,
the boat out, where the lonely land
dissolves into
the visible curve of the planet
she remembers seeing
from the B-reel satellite images in the documentary
on all the blue parts
of Earth.
And then
she is back at the beginning,
with the memory of a man
who once held her wrists
above her head,
gently straining
to keep his full weight
from crushing her, and when
she tried to pull him close,
he fought a little,
the way one leans back from a tide—
the effort nearly undetectable
to anyone outside the water.

Lonesome Beast
Velvet muzzle, wet nostril, signal
the heart has not hit the bottom of its well.
The creature is still mostly water. The moon
still nudge its tides. It cannot stay
still, on the planet on which it dwells,
in the galaxy with its balance of weights,
where gravity pulls harder each hour,
like a child tugging their mother
from a stranger’s house or lover blocking
the door, unsure of whether it’s an exit
or entrance. In all indecision,
a longing lingers, a stillness in which
emptiness contains every beloved thing
that kneels and opens its mouth to drink.

Alva on a Third Date
He whispers
to her about his love
of tragedy, after
his week-long survey
over coffee, then cheap
martinis—looking at her
as if he already knew
what was inside:
small breasts, shaved
thighs, fear of the lonely
grave, which cracks open
every time she waits
by herself on a barstool.
But Alva knows every
grave is lonely, even
those in which mythic
lovers clasp together
in their messy heaps
of dust. Later, at his place,
he hands her a cocktail
called a horse’s neck, mint
crushed from his mother’s
garden. They talk about their
fathers. How many times
has she wandered these
rooms with men? He lifts
her skirt, facing the courtyard
windows of the apartment
complex and she doesn’t
stop him, the arcade of pool
lights a box beyond which
she can’t see herself being
seen. She can tell herself
there are no neighbors. That
this has the prospect for love.
In his bed, she wonders if
Abelard ever hitched his leg
over Heloise the same way:
angled over her hips like a
carpenter’s square, so that
her desire always felt under
construction.

Alva and the Online Fishermen
1.

Behind each, a muddy river of longing,
these men reach out to her, holding toward
the camera the sleek bullet of a fish
angled toward the screen so she can see
the full length of their bodies, the golden glint
of their scales from lip to tail. She is trying
to forget D., and suspects a Southern boy
could do the trick, for D. hated water,
and here are all the men in Georgia
who might swim a football field’s length
through water of unknown contaminants,
who might huff and breath and stroke
to reach her floating in the lightless maw
of a quarry at night, who might kick against
the bullying current of a wild river to find her.
If all else fails. How could her life
be different? In every image the irony
of someone trying to bait her with nothing
but a dead fish. And yet she clicks.

The first, with orange visor and blue sky,
points a clear-eyed trout close to the lens.
Its mouth gapes open, casually, as if to speak,
and she cannot tell whether it’s alive or dead.
The boat beneath him is invisible. His
lips the perfect size and beard washed out
by the sun, he could be almost anyone—
and this is where her desire lies. He takes her
to dinner. A small pizzeria with a hurried
bartender and low ceilings she almost hits
her head against, floating above her body
when he brags in the first ten minutes,
“I’ve never paid for sex,” and touches
her knee for emphasis or to suggest, “I could
have you if I wanted,” and Alva not completely
disagreeing, for sometimes, she likes
to be cornered, to be held with her arms
against the wall, but only by men she trusts
will let go. And when he talks about fly fishing,
the rhythm and artistry of casting a line,
of the rivers in Montana, and how he
will sometimes close his eyes to listen
to the current, walking upstream to leave
his companions behind, she thinks for a moment,
this is a man she could love, until he reaches
for the check, and tells her, “Well, I should say,
I’ve never paid a hooker.”

Alva remains undaunted. In the hands
of the second, a bass is held like a holy
sacrament: the man grips its underbelly.
His face is serious. His expression grim.
Alva wonders who holds the camera, forcing
him to pose. No doubt someone insists,
that he must hold still to the task
of remembering. Jutting his chin out,
he has almost tilted his mouth into a smile.
His hands are small—or the fish is small,
everything she could use for scale is
too far in the distance: a stand of scrubby
pines, a heap of tangled branches
on the bank far behind him. The more
Alva lingers, the more his awkward stance
becomes familiar, an offering of a past
self to a future one he can’t yet know—
the one who submits himself up to cosmic
chaos and the digital court of ladies he’ll
never see, the ones who look and look,
like Alva, whose gazes he’ll never meet,
because, here, they are un-bodied,
infinite, complete.

Eventually, rivers turn to seas.
Alva leans into the oceanic burn
of the third. She likes his Adam’s apple,
how he stares into the sun. Only
the water’s gunmetal blue lies beyond.
He has cropped the boat from the frame
and appears to walk on water: miracle
of the fishes, miracle of hunger.
He wears gloves for what is pulled from the sea
must be sharper, she thinks, and the fish
is hoisted not held. Its mouth sings an aria
to what it has devoured, its mouth wider
than its tail, a mouth for swallowing whole
the smaller bodies of its own kind.
And though she knows he can’t save her,
the water is calm, the bounty heavy
as his t-shirt billows and hope creeps in.

Alva knows there are plenty of fish
out of water. Big fish. Cold fish.
She must let them off the hook
line and sinker. Sometimes, like her,
they must cut bait and switch, open
a can of rock bottom. Hit a snag
of the one who got away. Look,
she says to herself, here is a fine
kettle of big fish in small ponds.
Give them some slack. Reel ‘em in.
Red herring. Holy mackerel.

Of course, there is the fantasy of the boat
and forgetting. One day, she’ll find the one
with the handsomest fish and meet him on
a lake north of the city, where she’ll drum
her legs against his stern, and the water
will swallow the sound of all her lost loves
and the name of . From the prow, the man
will call for her over the slap of waves against
the boat, over the collision of wakes
that cross in the middle of the lake from
families on pontoons puttering
toward land and the boys on jet skis racing
away from it, and the silent gliding
of a blue heron beside them, and the fish
circling beneath the algae bloom that Alva
knows is a sign of all that can go wrong.
Yet, if she dove into it, disappearing
beneath its froth, this man would follow
before she had time to come up for air. 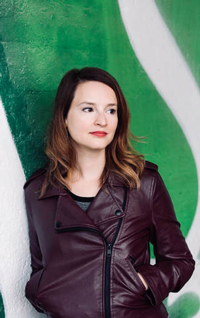 L.S. McKee’s writing has appeared in Best New Poets 2016, Best of the Net 2017, The Georgia Review, Crazyhorse, Copper Nickel, Blackbird, Gulf Coast, Oversound, B O D Y, and elsewhere. She received her MFA from the University of Maryland and was a Wallace Stegner Fellow in Poetry at Stanford University. Originally from the mountains of Northeast Tennessee, she lives and teaches in Boston.

“Killing Time,” and Other Poems