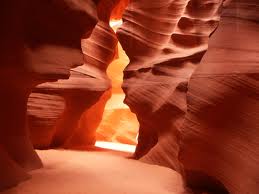 Just as Leah opens her mouth to tell him she’s pregnant, Russell says,

“There’s something blue down there.” The canyon rises to Leah’s left

and falls on her right. Without her glasses, it offers only immediate,

monumental folds and curtains of stone, the ribbons of color baked into

rock. Her backpack digs into her shoulders, and a breeze chills her damp

The warmth of the canyon floor is far below.

Yesterday they hiked in. What goes down must come up; the

canyon is a place of reversals. Here, their life’s masteries—Russell’s ability

day, her comp lesson plans and dissertation on Anne Bradstreet—didn’t

help them with the tent poles and collapsible stove. Outside the canyon,

his knowledge means a house in Tucson’s foothills, while hers has meant

a secure position which some part of her feels she may never get. Last

week, she laid her palm on his kitchen’s granite counter, stared out at the

“Are you sure?” Last night Russell broke her glasses when he fell

entering the tent. She laughed—it was cute!—but his promise to replace

them was so earnest she had to bite her tongue to keep from saying it:

“I love you.” Their first date—he asked her to coffee—was nearly six

months ago. Now the thought of coffee, which she has always loved,

turns her stomach. Before he woke this morning, she crept from the tent

and threw up at the base of a house-sized boulder, the third time in the

past week that her day has begun this way.

He tells her what he sees. A spot of man-made color on one of the

ridges that jut into the canyon below. A hiker in a blue shirt. “How long

since we were there?” he says. “Two, three hours?”

“Maybe,” says Leah. “We were on ridges all morning.”

“The light’s getting worse,” Russell says, squinting. He isn’t sure,

but he thinks he sees the hiker lifting his arm, raising something over

his head. A bottle? A glint that could be liquid. “Think we should”—he

stops. “I don’t know what we’d do. Hike back down? Commiserate?”

On the way in, the Park Service signs warned them: two-hundred

set off alone, or hike rim to rim in one day. No one would be dumb

The trail ahead soon disappears in a switchback. Russell’s expression

is the thoughtful one he wears when considering a new project. “Must

be several more miles to go,” he says. “We don’t know he’s in trouble. If

we go down, we’ve got to climb up again. He could just be taking a water

Leah runs a bandana across his forehead, then hers. He has not

asked for her thoughts. Somehow this is his decision. She shivers. She is

resolved to tell him before the trip ends, but this isn’t the moment.

“We probably look like he does,” he says, “to someone above us.” He

starts up the trail, and she follows.

Russell works from home, lists pros and cons when deciding what

to eat, sends correctly capitalized emails that end “Yours, Russell.” To

him, the point of the trip is to see the Grand Canyon. The talk they had,

and his ties to Tucson, came two months after the first coffee.

He clomps over the rock and dust like an old tractor, measured and

steady. A few weeks ago, before she knew the trip’s real purpose, she said

it would be nice to wake up next to him every day. He was sitting with

his laptop the way he does, cross-legged on the bed, lips moving as he

tapped the keyboard. He looked at her like a yogi, plain and peaceful,

radiating a kind of hope for the taking. He nodded and said, “It would

be nice.” She imagines that when she tells him, she’ll see this look at first,

but then his eyes will focus, his eyebrows draw closer, and when his lips

part, they’ll speak just the right words, the way they do when clients call.

After many more switchbacks, the rim is visible against the purple

sky. Russell stops and turns, taking a last good look. She sucks in her

breath, wanting him to take her hand.

She breathes out. They continue.

It’s dark when they reach the trailhead. They’ve donned extra

clothing, pulled zippers tight. The sky is on its last blue. Pinpricks of light

and hugs Russell, a cold compress of wet layers and skin.

Russell says, “We can tell someone.” She follows his gaze—light

The woods smell of fresh pine. A cabin emerges in a small clearing

of knee-high grass. Floodlights snap on, the door opens, and a dog runs

out. A burly bearded man steps onto the porch.

“We wanted to let someone know,” Russell says. “We just got off the

trail. There was a hiker down below us.”

A brown blur—a puppy skittering out the door, then another

“It was a while ago. He’s probably—he’s definitely still down there.

Thought we’d let someone know. Since it’s so late.”

Clearly, the man works here. You can’t just live next to the Grand

Canyon. But there’s no sign, no red cross, just a pile of fencing in the yard

and a toolbox on the porch. Leah bends, hand extended, coaxing the

“You wanted to assuage your guilt,” the man says. He is older than

they are, his beard half-grey, but he stands straight and his arms fill the

sleeves of his olive-colored work jacket.

“We—he didn’t signal for help or anything. We just saw him.”

“Well, I hope he makes it,” the man says. He lifts an arm and makes

a big sign of the cross. “You may go in peace.” The dog licks Leah’s hand,

then follows the man inside, the puppies racing behind her.

“Good to know someone cares,” Russell says as they make their

way down the forest road toward the parking lot. “I guess we could have

waited. On the other hand, he’s paid to do this.”

not Park Service. Morally, it’s maybe not as clear cut.”

They walk beside the road, on either side of a ditch. The moon

peeks through the trees. Russell continues to speak. His flashlight flicks

on. Leah stops and squeezes her eyes shut. The moment is here. It must be.

“When you think about it, hiking’s only steps,” comes Russell’s

voice. “One after another.”

She opens her eyes. Russell is a silhouette, the beam of light steady

before him, revealing the road and the ditch ahead until they curve away

Probably the hiker is fine. Probably he won’t care whether someone

is waiting when he finally exits the canyon. But maybe he will, and the

trailhead is not that far back, and in the moonlight Leah can see, more

or less, where she is going.