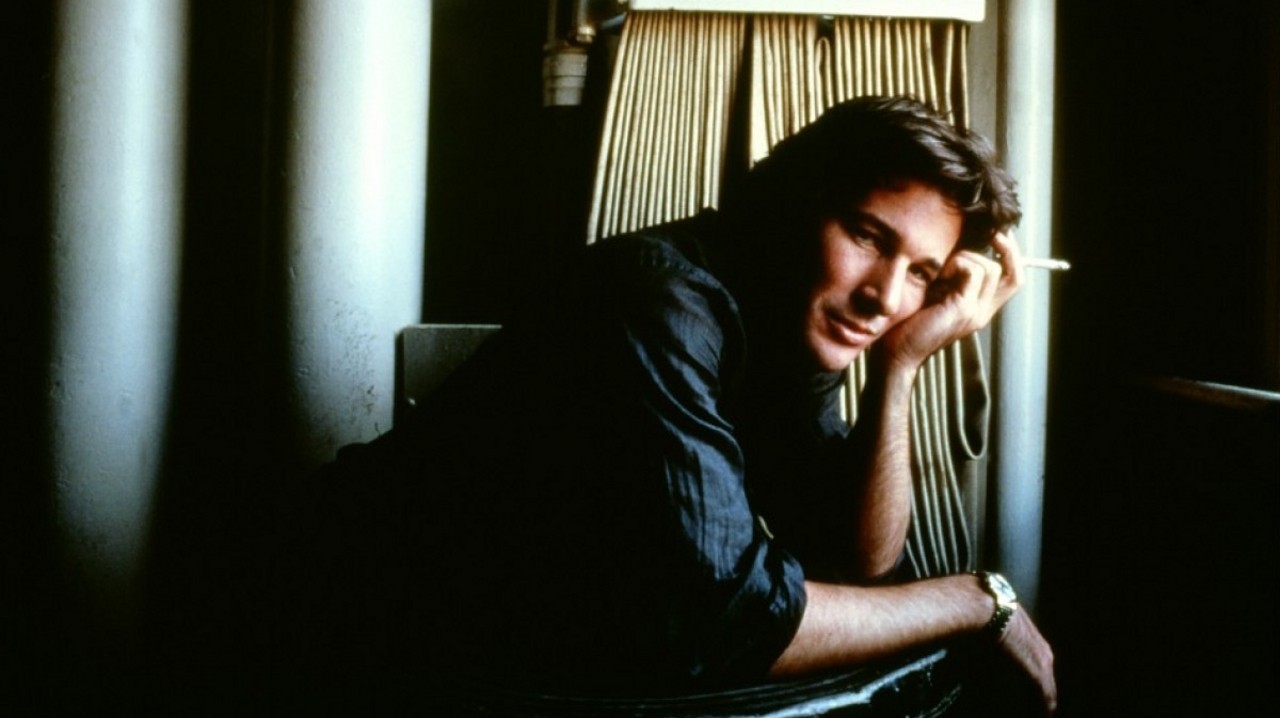 The shirts folded; the ties rolled;
the suits hung in descending, mono-
chromatic earth tones; shoes
horned and shined; and the selection of the right
combination choreographed to a
not-quite jazz but a jazz-inflected voice,
nonetheless, pouring from Bang & Olufson speakers,
bouncing off high ceilings in a condo,
minimally but well appointed: Here is a space
in which a man can make bad decisions.
He’s Julian, the gigolo, and to a teenage boy
walking into a movie theater in 1980,
he looms as large as a Sphinx
in front of a hotel in Vegas;
he looks like the answer to the riddle
of what it means to be a man.
If you follow Julian, who is set up for a murder,
set up by someone he once called on
in the middle of the night as a friend,
you can trace his steps back to his salvation. Cut to:
Julian crossing the hotel bar to a booth in back
where a woman, Michelle, sits. Though she is
the woman who will save him,
and the only prop separating them
is a table with cocktails and appetizers,
choices are made. The wall between them
should blow over with a whisper in her ear,
but like most of us, Julian can’t see the one
who loves him. Though she’s already been found,
he keeps searching, distracted by bodies
stretched out behind him in his wake. And,
like most of us, he gives up, believing
there’s nothing left to believe in.
Perhaps his not believing makes him a hero,
perhaps to be without insecurity would make him
less believable as a man, without his mistakes
we’d have no story, without his nights to pass through
we’d be less intrigued. Perhaps
he believed his naked body could be a torch
lighting a path to someone he thought
was waiting just up ahead. Cut to:
Two hours later, a lifetime in film hours,
Julian is in jail now
speaking through a plexiglass wall,
when he asks Michelle, “Why has it taken so long
for you to come to me.” All Michelle can do
is shake her head and smile.
She knows she never left him in the first place.
She never needed his pleas to bring her back;
she never needed his wounds or his prison sentence
for her to heal him or to break him free.
When there is no more ground to search,
when the sun goes down, he turns
around, tracing his steps back to his
beginning, the night in the hotel bar,
the morning after in his bed; he
allows himself to go back there,
where she had always been.
How she covered his tracks with kisses…
How she stood through all his rages and his accusations…
And after all his absences and wanderings run their
course, after his questions, which never found answers,
he walks out from this prison cell
he built for himself, and it becomes clear
why it was worth it to fill his story with so many
nights in search of love through suffering: He finds her.