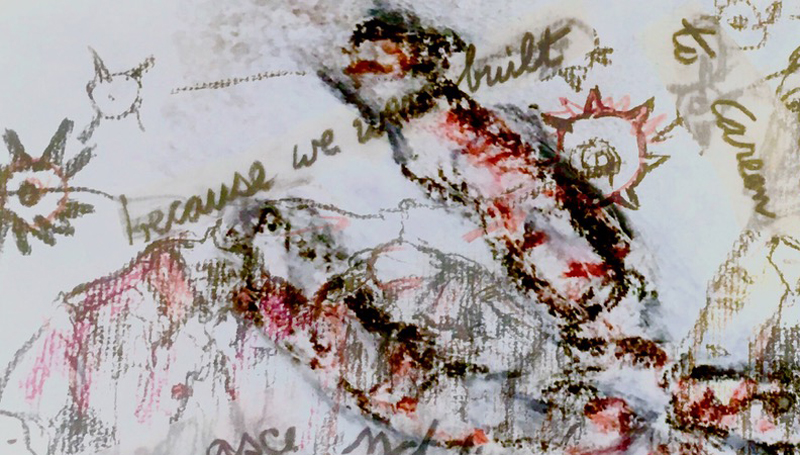 “The Poetics of Entanglement” is a phrase I have come to use to talk about what I want from my poems and what I value in the poetry of others. I draw the metaphor from quantum physics and Darwinian evolution. I have always been fascinated by science, especially evolutionary biology. I started my academic career in a pre-med program, married a pathologist and have a brother who is a physiologist. In other words, it’s not unusual to have a dinner conversation about some of the reference points in the three poems of mine printed here: genetically modified mice, the microbiome, new research on telomeres.

I believe both poetry and science offer high-powered lenses to inspect the microscopic as well as the macroscopic aspects of a world we often sleepwalk through. I am always interested in the different “truth claims” of poetry and science, their different modes of experiment and observation. The entanglement concept for me is about finding relationships‒ the complex way things respond, inform, interact with other things seemingly light years apart, but also about the quantum idea of superposition. For example, in the world of quantum physics it is said that a single particle, an electron or photon– a unit of light in its particle form–may be in two different energy states or positions at the same time. This sense of ambiguous shiftiness recalls the way a word, phrase or image in a poem may shuttle between two or more fields of meaning or modes of discourse simultaneously. This is where language in poetry differs most from language in everyday discourse.

In a poem like “Telomere” I am exploring the play of scientific language and perspectives against the clumsy dailiness of life in the body. The term “telomere” with its suggestion of philosophy/religion was invented from Greek elements: “telos” means “end”. If you google the word you will see the outflow of products and processes for eternal youth… So the word/concept plays upon our fantasies of immortality and perfection. In the same way, in “Microbiome” (a word the refers to the shadow body of bacteria within our fleshly body) I’m interested in the biology of the microbiome as a metaphor for how our limited perspectives get entangled with the way we see and judge. Finally, “Nude Mouse” focuses on a type of mouse genetically modified so that it has no immune system and can be used to test any infectious agent. Here, for me the language of genetically modified mice can’t help but evoke more terrifying human-on-human experiments.

Poetry like science is always experimenting and questioning to find new ways of seeing and knowing. In introducing the two poets brought together here, Duy Doan and Tara Skurtu, talented young poetic explorers I am blessed to know as friends, I will zero in on the way entanglement, or more specifically superposition happens in a poem drawn from each.

Duy Doan’s short piece “Ask Mr. Owl” is an excellent example of superposition. The repeated phrase “seventy-seven times seven” exists in two radically different “energy levels”. In the context of the reference and tone of the title and fragmentary line of epigraph “How many licks does it take…” the phrase in its low energy state suggests of a bit of dialogue from a cartoon commercial for Tootsie Pops, as if it were the exaggerated answer to the voice in the commercial making a pitch: “How many licks does it take…?”

But to anyone conversant with the Christian Bible and its tradition, the phrase has a radically different tone and context, what I will call its high energy state. In this state, “Seventy-seven times seven” is the answer Jesus gives to a question asked by his disciple Peter in Matthew 18:22: “Then Peter came to him and asked, ‘Lord, how often am I to forgive my brother if he goes on wronging me? As many times as seven times?’ Jesus replied, ‘I do not say seven times but seventy times seven.” In context, Jesus’ specificity is ironic–it is meant to dispel any materialistic, reductionist calculation. This hyperbole of the prophetic salvation language, then, gets weirdly juxtaposed to the rhetoric of capitalist consumerism.

This shifting between contexts and registers continues with the question and response: “How many/ baptisms do we get?”/ “Seventy-seven/ times seven.” This refrain seesaws between catechism and game show question/answer. The energy of the poem radiates from the suggestions, contradictions, and questions generated by these two states of the poem’s language. We might read the poem as exploring the way, say, a child might experience the confusion of contexts created by the authority and urgency of religious vs. commercial media–Sunday sermon vs. Saturday cartoons.

Or we might read the poem as a skeptical reflection on the relativism of truth; each religion, each sect with its own tradition of baptism, or on the way religion and consumerism, from a particular perspective, each try to sell us something that appeals to the ego. The playful surface of the poem seems to guarantee that we can be infinitely forgiven, that every bad move can be instantly erased by the next (which starts to sound a bit like the antinomian strain within the American Dream), but the Tootsie Pop reference adds a kind of satiric edge: a trajectory where, instead of a Puritanical struggle and set of renunciations, the pilgrim progresses from sensation to sensation: “How many licks does it take…?”

The irony, though, is that back in the gospel text, Jesus follows up his riddling answer with a parable where a man in debt begs his master for forgiveness then turns around and violently exacts payment from someone who owes him. The passage with all its soothing sense of forgiveness takes an about-face when the master condemns the servant to “be tortured until he should pay back the debt in full…”. The poem’s ambivalent energies open up questions about pleasure, desire, forgiveness, but also set up anxiety– the unspoken but palpable sense of guilt, the sense that the candy-coating of consumer culture might encircle something darker than the tootsie-roll core.

Tara Skurtu’s “Amoeba Game” also creates superposition, as it moves between two concrete activities: the narrator frying an egg and a memory this triggers of girls playing a strange game in “Brownies”. In a poem no word is innocent, no expression is safe in its worn-in dailiness. The entanglement of the poem starts with the punning doubleness of “brownies,” which are made with broken eggs. There’s a culinary language here that splits between two food groups: the basic hard core breakfast protein and the confectionary brownie.

But no reader can miss that these groups are gendered. We have a female narrator in the kitchen in a stereotypically female role and her activity stimulates memory of a specifically gendered organization meant to shape young girls to become particularly kinds of women–resourceful, dutiful, team players. Simultaneously, we have the solo, reflective female narrator juxtaposed to the blurred mass of girls playing the game. It’s an interesting exercise to imagine the “cub scouts” playing the “amoeba game.” It seems pretty clear that this is a uniquely female game aimed at losing individual will in the larger group, learning empathy.

There are some shifty words that create what I’ve called “superposition”–they exist in two different orbitals, two different energy states at the same time. The phrases “the carriage of its (the egg’s) brown shell” and “mouths we weren’t supposed to have”, both have clear, tame, objective meanings, but veer into a more charged state dealing with transitions in sexuality and gender. In the context of socializing girls to become women– “carriage” sounds like the pumpkin that becomes a carriage in the Cinderella story, and “mouths we weren’t supposed to have” sounds suspiciously transgressive.

Freud famously described childhood sexuality before the social enforcement of normative gender and sexual roles as “polymorphous perversity”, a direction the language of poem–“amorphousness”, “undulating” –is “wandering” off toward. That sense of transition and transformation is present even in the description of the frying egg “the flapping of the egg’s wavy edges.” The provocative psychoanalytic thinker of the 60’s, Norman O. Brown, made the point that we struggle for our sense of autonomy and selfhood exactly at the nexus where our biological sex drive meets our culture’s repressive imperative to channel that energy into conventional marriage and the reproduction of social norms and boundaries.

The entanglement of the word “amoeba” with its infantile encircling of the word “me” within the cytoplasm of its echoing vowels comes when we sense the undercurrent of the word as infectious. We might notice at this point the entanglement of “egg” and “amoeba”. Poetry’s microscope is trained on the shifting, fraught place where our ability to create ourselves runs into our biology. So what seems playful in the attitude toward this game becomes more ambivalent. The game is a socializing tactic, “one girl at a time would become/ an amoeba and lead the rest…”. But, on the contrary, the game is also an anarchic, transgressive form of play. It erases boundaries and tips the world topsy-turvy “our head and arms/ became legs and feet”.

This later kind of game suggests the imaginative play of poetry, itself. The poem entangles the world of children’s games and the world of poetry. Skurtu has used the title of her poem “Amoeba Game” as the title of her first collection, and ultimately, this poem becomes an “ars poetica”–a poem that offers a poet’s own claims for the function of poetry. Poetry, itself, Skurtu suggests, is an “amoeba game.” 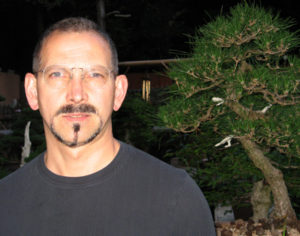 Judson is a poet and visual artist, who has written and published a variety of poetic forms and genres. He was Director of Liberal Arts at The Boston Conservatory for twenty-five years, and is now, happily a full-time Professor of Liberal Arts at Berklee College of Music, where he teaches courses on Paleolithic Cave Art, and a Poetry Workshop focused on a range of Japanese poetic forms. He regularly publishes haiku, renku, and haibun in the main journals of those forms. He also writes contemporary lyric poems and dramatic monologues. He has been involved in a wide range of collaborative experiments with composers, choreographers, and has had his poems set to music by composers, such as Mohammed Farouz and Marti Epstein. He was chosen as an “Emerging Poet” by John Yau for The Academy of American Poets in 2007, and won the Philip Booth Poetry Prize from Salt Hill Review in 2013. His poems have appeared most recently in Folio, Volt, 1913: a journal of forms, and Cutbank.