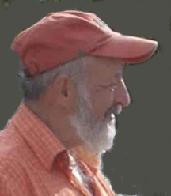 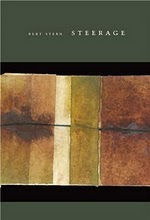 There was a bird I liked,

its name was I don’t remember.

It skimmed the waves a day from shore.

My mother held my head up to the rail,

I was too sick to stand.

this bird has its nest in America.

I could fly as far as that bird flew,

my mother said, its wings are fragile feathers.

When the ship came into the harbor

my spirit was waiting for me,

dancing on the shore,

a bird on the edge of the water.

At the top of Spruce Hill,

just before the highway

plunges into the valley,

the wide seep of mountains

gathers me in to its shadow

and silence, holds me,

until I am ready to fall

with the turnings of poplar

and oak.  Through the windshield,

even the thin rain that takes on

gold light from the sun in its falling

is fuel for the burning.

Born in Buffalo in 1930, Bert Stern is retired Milligan Professor of English at Wabash College and Chief Editor of Hilton Publishing.  At present, he teaches in Changing Lives Through Literature, a program for people on probation, and, with his wife, Tam Lin Neville, co-edits Off the Grid Press, which publishes collections for poets over sixty.  Stern’s poems have been published in journals including Poetry, Hunger Mountain, The American Poetry Review, Spoon River Poetry Review, and New Letters, among others, and in a number of anthologies, including Anthology of American Verse & Yearbook of American Poetry. His chapbook, Silk/The Ragpicker’s Grandson, was published by Red Dust in 1998. Steerage, a new collection, was  published by Ibbetson Street Press in the summer of 2009.  Stern has recently been featured reader for the Brookline Poetry Series, Calliope, Chapter and Verse, Pierre Menard Gallery, and has also read at Boston University, Lesley College, UMass Dartmouth, and Berklee College of Music.  He is a reader at this year’s Boston National Poetry Month Festival at the Boston Public Library.