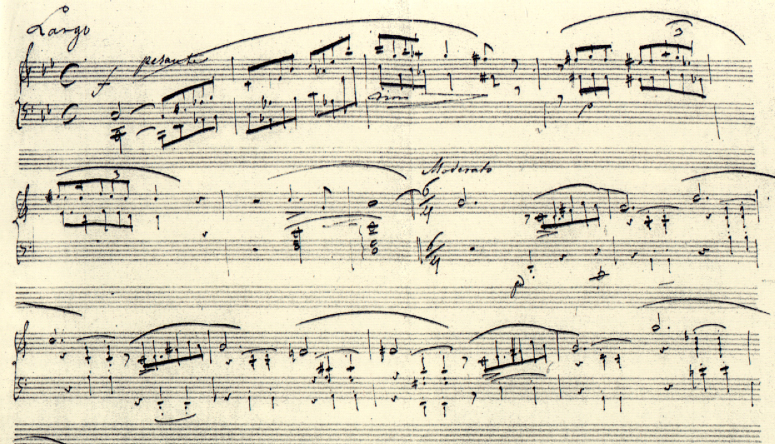 1938. “Come in before the house fills up with flies,” says the woman in the doorway, hair tightly wound in a bun. I follow her into a dark-paneled foyer, through the musty parlor of the hostel on Willesden Lane.

My body sways, and I reach for the back of a wooden chair for balance. Just hours ago, I was on the slow lunging train from Vienna to London. In the passing shapes the snow made, I tried to imagine my old stone building, the bakery at the end of the street, apple strudel in the window, my mother in shadow, leaning over the Sabbath candles. Instead, all I could see were two soldiers in front of our house, beating my father; he was on his knees, shirtless, bleeding into the snow. I had closed my eyes, tapped the opening arpeggio of Chopin’s Ballade into my lap, waited for the music to erase everything.

Mrs. Kohn, as she calls herself, leads me into the living room. In a cove near the bay window, she doesn’t see me stare at the rust-colored shawl covering the piano. Is it a real instrument, or a piece of furniture? Upstairs, everything in my suitcase fits into half a drawer beside my cot. “Lights out at ten-thirty, hot bath once a week,”she says, brushing my hand. It’s the only time we ever touch. Later, at the two long dining tables, the Yiddish, German and broken English of thirty-two children erupt; I’m fourteen, the average age. A boy with the longest arms grabs for the last piece of challah.

Morning. Garment factory, London’s East End. At the sewing machine: lift the presser, insert navy blue cloth; push the foot pedal. Double stitched, perfectly straight seam. Next to me, a girl cries out, her finger stuck underneath the needle. I’m lucky – my father was a tailor.

Evening. Willesden Lane. Lift the shawl from the piano, stretch my hands over the keys, play two opening chords of “Clair de Lune.” The notes my mother taught me; they rise and float over the children gathering on the stairs.

Except at dinner time, Mrs. Kohn keeps her door shut. I make my own way.

On the streetcar heading to the factory, I remember another streetcar, crossing

Vienna. I was standing beside a tall boy with thick black hair. Was he too old for me? We pass the Danube, majestic Symphony Hall, cafes filled with artists, composers. At Mahler-Strasse, I step off. Walk down the wide street toward his apartment, my refuge. Blocking the entrance, a soldier leans on a rifle.

I take off my mittens, hold up the sheets of music.

“My piano lesson.” Every Sunday since I was ten.

I glance up at the second floor. Professor Isseles in his living room window, he’s closing the curtain.

The soldiers words, like an echo in a dark tunnel, “It is a crime for him to teach a Jew.”

I don’t remember the way home, but that night I sobbed in my room. My older sister,  Rosie, her makeup bag under her arm, snuck me into the bathroom. She painted  my eyelids with blue shadow, glided on bright red lipstick.

Then Sonia was standing in the doorway. “My turn.”

After lunch, Mrs. Kohn holds up a small pile of mail. I rip open the envelope from Vienna. “Dear Liseleh:  Your sister, Sonia, has a space on the train, but no sponsor. I hope you are practicing  your music. Love, Mama.”

Open the phone book to “D”, copy down all the Danzigers, the name of Father’s cousin. Knock on doors up and down the streets of Golders Green; shops on the streets near Platz & Sons, the factory where I work. Someone draws a shade, no one answers the bell. On the way back to the hostel, someone offers an overripe tomato. A Quaker, God bless her, she finds a family for Sonia.

1939. Train station, Liverpool. Crowds of parents, volunteers, English toddlers lined up for evacuation. Track sixteen. I see her maroon coat, as if in slow motion she’s moving down the steep steps. “Sonia, Sonia.” We have only thirty minutes before she has to leave on another train. Arm in arm, we walk to a nearby café. My younger sister, almost my height. Over hot chocolate, she hands me my grandmother’s silver lame’ evening purse, inside a letter from Mother; and my tattered book of Chopin’s Ballades. “Our parents are still trying to find a way out for Rosie,” she says. Back at the station, we hug. Coming toward us, her adoptive Quaker parents who will take her north to Norwich.

Over the wireless, the Prime Minister declares war. In the hostel, black cloth covers all the windows. Gas masks wait at the foot of every child’s bed. For shelter, we carry sandbags, mattresses, first aid supplies to the basement of the convent next door. Later, huddled in the living room, we listen to Mrs. Kohn, her voice, almost a whisper: “No more transports will be allowed.”  I bow my head. Sonia had taken the last train from Vienna to England.

Spring, 1940. Two letters. The one from Sonia shows her standing in a Norwich garden with her new family and their dog. The other, from me to my parents, is stamped “Undeliverable.” I can feel the jagged ends of my nerves as I walk with my friend, Gina, to feed the swans. At Hyde Park, an antiaircraft gun reaches to the sky like a black swan’s neck.

Air raid wails, bombs exploding in my eardrums. In the hostel’s cellar, unwounded, the piano, re-tuned.

The thunderous coda of Chopin’s G minor Ballade. Mama, can you hear me?

My audition for the Royal Academy of Music, a few months away. No coal in the cellar. Beat of the metronome, memorize repertoire, practice sight reading, ear train for solfege – in hope of a scholarship. My cold fingers ache.

Sixth in line. Refugee in a homemade blue dress, I bow to the three judges, test the pedals of the Steinway grand, inhale. Beethoven’s Pathetique. Everything disappears into the dark opening C minor chord.

Out loud at dinner Mrs. Kohn reads: “The Associated Board…pleased to inform Miss Lisa Jura that she has been accepted…”  The children clapping, kissing my cheek. At the table, a boy whistles, “God Save the King.” More news, a letter from a distant cousin. Rosie and her fiancé, Leo, have escaped to Paris. The sweetest ending.

1944. London. Howard Hotel. I pound out “Peg o’ My Heart”; handsome soldiers, flyboys on leave clink their glasses of whisky. My red hair’s bobbed, a touch of red lipstick. In my long gray dress with its deep V, who would guess that I’m nineteen? On break, a French captain lights my cigarette, kisses my hand.

1945.A pealing from Big Ben, from all the church bells. Noisemakers, buses’ horns, crowds singing in the streets. Alone, past the boarded-up buildings, I walk to the swans; stunned I watch their feathers glide over the murky pond.

Days later, the jagged lists of survivors taped to a hallway wall. Not alphabetized. I run my finger down the names to the “J’s.” No Juras. Later in my room, I take from my nightstand the photograph of my parents: Father’s hair graying, Mother’s smile, fading into a white line.

Liverpool station. 2:22PM. In a disappearing blast of steam, Sonia and I push our way toward Rosie. She’s trembling beneath her ragged overcoat. The three of us hug. “But how…?” Before I finish, she answers, “At the Swiss border,

I climbed barbed wire. Leo threw the baby to me.” Beside her, Leo kisses the fat cheek of his daughter. Around her tiny neck, on a chain, the charm I’d given to Rosie, passed down, a dangling gold piano.

Behind the velvet curtain, I adjust the straps of my shimmering red gown. Every seat is filled: the hostel children, women from the factory, Quaker brethren, the handsome French soldier, my two sisters. A hush over Whigmore Hall. I walk to the Steinway grand, its lid open. I poise my fingers for the opening chord of the Pathetique, hear Mama’s voice, “Liseleh, before you begin, breathe.”