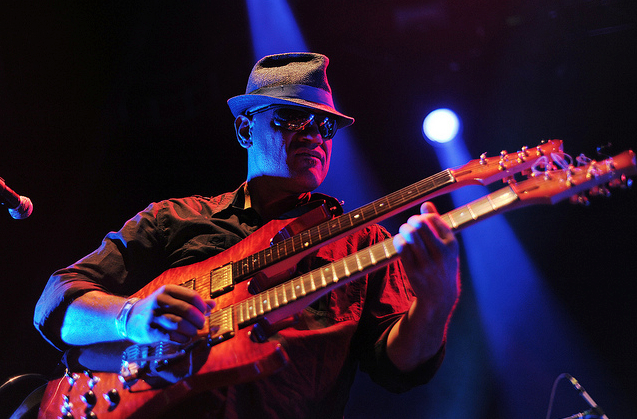 David Fiuczynski is Director of the Planet MicroJam Institute at Berklee. He also moonlights as the leader of the Screaming Headless Torsos.
FUSION Magazine: Dave, please tell us about the Institute. What’s new in the world of microJamming at Berklee?
Fiuczynski: Maybe some history first. I was first exposed to microtonal music at New England Conservatory in 1986. At first I didn’t like it at all. It really sounded abrasive and out of tune, but then I heard a really happening flute and clarinet duo written in 72 notes per octave. From then on I became keenly aware of new possibilities based on classical and ”non-western” microtonal music, especially in the realm of jazz and groove music where it is still basically a novelty. I returned to NEC to get my masters (2006-08). NEC did not offer a micro degree, but I tested out of most of my classes and then essentially put my own microtonal degree together by electing any and all classes that had anything to do microtonality: Joe Maneri’s very last microtonal class (and then two more semesters with Dr Julia Werntz, who was Joe’s student and continued teaching microtonality at NEC); Asian Modal Systems; 20th century classical music; Turkish music history; and independent Chinese music lessons with Shin Yi Yang (transferring melodies from the zither like Ghuzeng and Gucin to guitar). I also split my lessons between Peter Row (sitar) and Bob Laboree (Turkish harp). For my lessons and classes I transcribed Turkish, Indian and Chinese melodies and improvisations using Joe Maneri’s 72note system. Our western notation system is used but microtonal accidentals are added:

I was lucky that Ron Savage allowed me to teach the microtonal ensemble at Berklee. Kudos to him for being open minded enough to say that he honestly didn’t understand what I was trying to do, but after I showed him all of my research, including the basic repertoire and teaching methods, he said we should try it as a proto-class. So the Planet MicroJam Institute started as a microtonal ensemble where my research included adding arrangements of traditional melodies, microtonal classical pieces (mostly quartertone string quartet and piano pieces), standards, and originals to the repertoire. The idea was to expose students to different microtonal musics and methods used around the world.The Planet MicroJam CD (a result of a Newbury Comix grant) is used as the basis of repertoire for the microJam ensemble. Furthermore, students are encouraged to write and/or bring in their own arrangements.

Then, with the support of Larry Simpson, Roger Brown, and Matt Marvuglio, the more advanced students work on extra repertoire for concerts outside of Berklee. So far the Planet MicroJam Institute touring ensemble has performed at festivals in Italy, Lithuania, and the Republic of Georgia, as well as concerts in Boston, New York, Philadelphia, Germany, and Austria. We’ve done clinics in France, Spain, and Switzerland where we encourage MicroJam students to answer questions and teach.

The next step is to offer a microtonal minor for undergrads in Fall 2015 and and a graduate level micro major in Fall 2016. The program will offer rigorous microtonal studies in a classical, jazz/groove/free-improv and a ”non-western” context. The goal is communication. Any student from any country, background, musical style, or preference will be able to explain precisely or perform a sequence of notes or chords that are outside the Western 12-note-per-octave system to any other student from a different background or style. I would like to remove the hurdle of not being able to work on music merely because it is outside of the Western 12 note system and, as Berklee President Roger Brown put it, “Create the conditions for miraculous music making.”

Future goals include just intonation writing and performing methods, more advanced harmony beyond quartertones, and the use of 21st century state of the art keyboards, which would greatly advance microtonal harmonic thinking and learning. The challenge though is to find a cost effective but also playable and useful keyboard. A universally used keyboard of the future may look like the Terpstra: 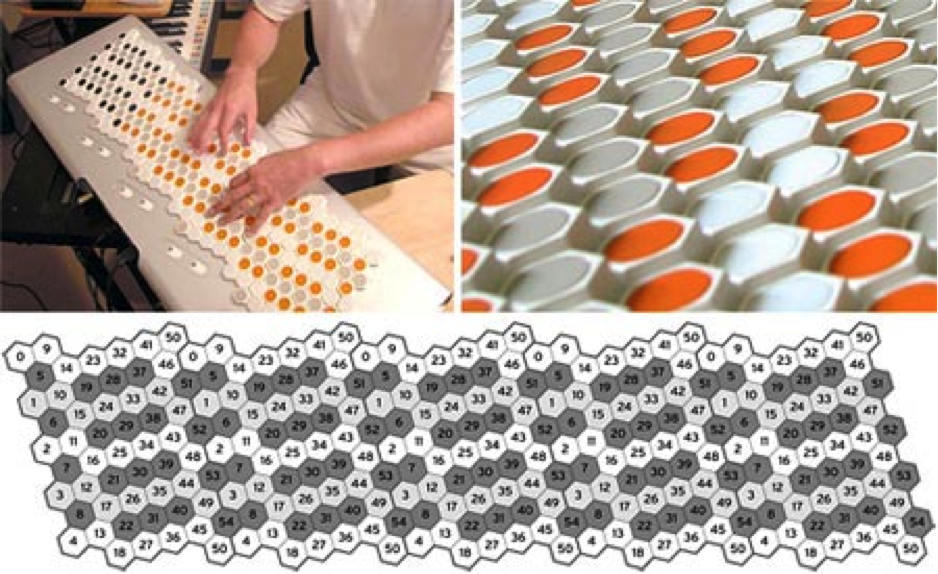 To get an idea of what all the above sounds like, please go to http://www.planetmicroJam.com/
You can hear a few microJam examples like a traditional Turkish melody-inspired arrangement (featuring Kenwood Dennard), a microtonal original jazz composition (featuring Jack DeJohnette), a JDilla groove-inspired micro original, and an arrangement of a Sun Ra piece, and more.
FUSION: What about examples of student work and the spread of this concept among students—the very stuff an institute should be about?
Fiuczynski: The interests and needs of the students have been mind blowing, and I’m always stunned to see how much I learn myself in the process. I notice, especially among foreign students, three different levels that students progress through. 1) They arrive at Berklee with dreams of being the next jazz or rock star, then 2) realize they have their own traditions or that there are many other world musics they would like to explore, but 3) they realize they don’t want to be traditional players. They want to mix and match and “microJam” in their own way and need a method for analysis, composition, and performance. That’s where the microJam Institute comes in and fills a void that seems only to be growing!

Once students have microtonal skills under their belt, they are encouraged to bring in their own material and hopefully employ current or even better NEW rhythms in their writing. I’m noticing that microtonality needs new rhythmic contexts to thrive and Berklee has great potential for rhythmic innovation. To encourage this, I put on a rhythm innovation contest. The results were quite interesting. One student wrote music based on his heartbeat; one recorded a creaking old bridge; and another had different rhythms going on simultaneously.

Furthermore, there’s the unexpected development of students using the microJam concept to record, preserve and resurrect—or at least attempt to resurrect—musical traditions. This goes far beyond what I imagined for the microJam Institute. I’ve always pushed for innovation as we move forward in the 21st century. And I also can’t wait to see what the past will reveal!

FUSION: These are amazing developments, Dave. The Institute creates opportunities students won’t find anyplace else. Where can readers hear some of this music?
Fiuczynski: Giorgi Mikadze arranged a few short Georgian choir pieces for the MicroJam Institute at the Tbilisi Jazz festival Oct 26, 2014: http://www.youtube.com/watch?v=O1xfiHROr1I

FUSION: In addition to directing the Planet MicroJam Institute, we know you “moonlight” as the leader of the Screaming Headless Torsos. What’s new with this very undead band? Still headless? Still screaming?
Fiuczynski: Yes, still alive, kicking, headless, and screaming! I’m glad to say that the new Screaming Headless Torsos CD, Code Red, is out: https://www.youtube.com/watch?v=jM4ikyhw3zM

A sneak peak can be heard at www.torsos.com. The new SHT CD is another eclectic mix of rock, funk, soul, and experimental elements, but I would say it’s more song oriented. Maybe we’re older and wiser now? We can say the same thing with fewer notes and over-the-top playing. There is also some microtonalty on the new CD. On the track called “Fried Tongue,” the solo section has microtonal comping. We also do a version of Jimi Hendrix’s “Angel” that we play live. You can find different versions on YouTube (warning: of varying sound quality), but the solo section is arranged to be in a microtonal mode. This is my homage to a possible ‘‘living’’ Hendrix who retired in Morocco, occasionally jamz out in the old town of Marrakech and “rocks the Kasbah” with a mix of Rock and Middle Eastern modes! Ha-ha! You’re going to hear more of this, because there are so many possibilities!

FUSION: And you’re the man to seek them out. Thanks, Dave, this has been great, as usual. The music, the ideas, the creativity that keeps on stretching—it’s inspiring.