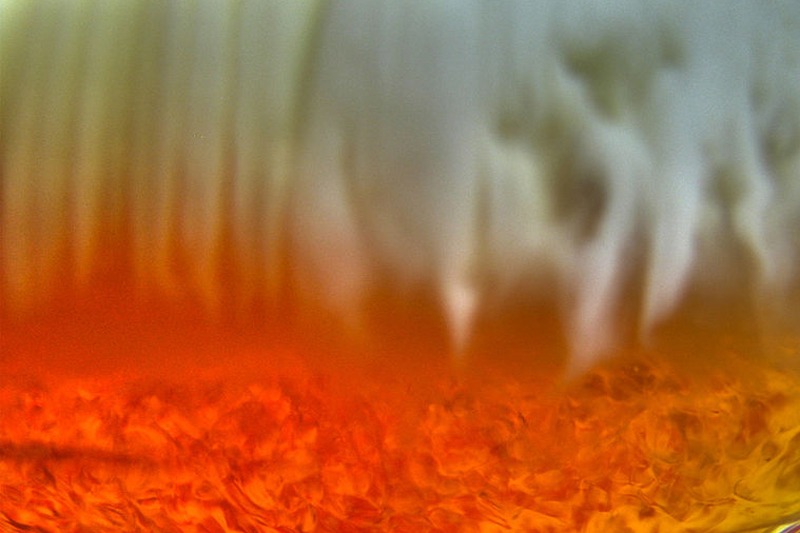 Chipped, worn-black wombat seeds
Taken, unrepentant, from the chest of our man.
Our man, here, out in the shadow-wrapped cloister of a tower.
Shut away from the rest of the world.
Kept away from dollar-store pain.
Distilling, instead, something finer – spirit, wine, and perfume:
Aphrodisiatic sorrow scraped from the barrel,
Turning over itself in a growing cylindrical wave
Then dripped, like honey, into a glass jar
Awaiting a heat-treated, air-tight lid.
The seeds are pressed into the syrup by fate’s steady thumb,
Moaning, as they do, a tired lament of ocean black.
But thumb stifles sound less surely than honey,
And within moments the brief, pathetic wail
Is swallowed by slow-seeping sorrow.

The way steam forces itself out of the wet wood
And is pulled into the vortex of the rising flame.
Hill and forest inked into the dim blue and green
Of the barely-twilit sky.

Stable, unbroken watercolor above
The Void. Below:
The oily, dimpled mimeograph of the lake –
Uncalibrated, off-center, rolling over and over and over again.

All is cool or black, save the orange glow of the coals,
Rough-hewn gemstone breathing like precious metal,
Canopied by half-eaten logs with diseased bites
Taken from their bellies – white pox and searing strand.
A vaulted cradle for the flame.

Look up –
The first star.

Staring out the vacant window until my vision
Blurs and the world shakes, trying to focus
An unfamiliar world.

Two realities drifting into overlay
Thrust apart at the rainbow-edge of their refraction.
The childhood tree limbed to a knotted match-stick buoy.
The weather-warped fence, planks curling along their longest edge.
The tin shed with the rusted roof
Whose lime-green paint wipes away
Like chalk onto hand or sleeve,
Desperate for another wearer.
As if to say: Any life but this.

Felix Aguilar Tomlinson, a native of Minneapolis, MN, graduated from the Boston Conservatory at Berklee with his BM in Voice Performance in Spring of 2020 and has returned this year as a graduate student pursuing his GPD in Opera Performance. Felix is presently serving as the President of The Garden.
Featured Artwork: paul (dex) bica from toronto, canada / Wikimedia Commons [ CC BY-SA 2.0 ]