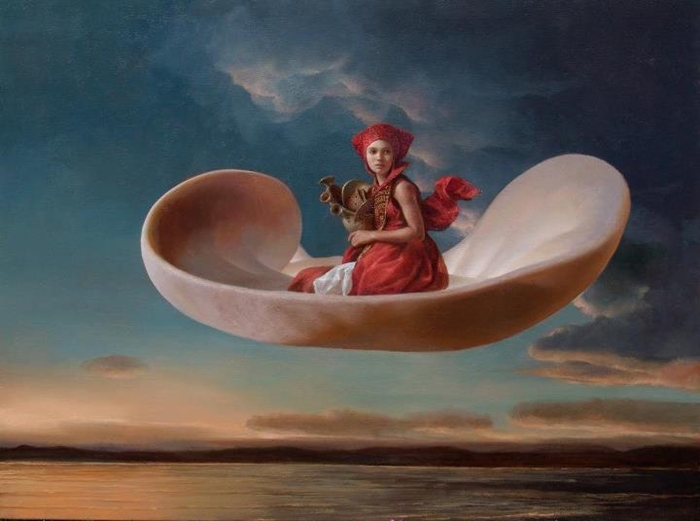 Many people know that the art movement of Surrealism began in Europe and that the most famous surrealists are European as well. But what few people may know is that the grand majority of them fled to Mexico because of political ideologies and found in this country a great deal of inspiration for their art. Some of them settled there for the rest of their lives and their art is even considered Mexican. Artists such as Remedios Varo, Leonora Carrington, Wolfgang Paalen and André Breton are some of the surrealists who visited the country. Even Salvador Dalí made a short visit and said: “There is no way I’m going back to Mexico. I can’t stand to be in a country that is more surrealist than my paintings”.

In 1941, Mexico opened its doors to thousands of European refugees. Most of them were artists, intellectuals and educated people who felt close to each other because of their experiences in war, and so, they formed a very united community (including of course, the surrealist artists). On that time, Mexican art was governed by the established canons of the muralists (Diego Rivera, David Alfaro Siqueiros, José Clemente Orozco, etc.) therefore, surrealism were not very well received on those first years (Resumen).

Earlier in 1938, Andre Breton (leader of the surrealist artists) visited Mexico. It is known that he said Mexico was by excellence a surrealist country. What caught his attention the most was how Mexico has preserved its mythological past through the ages and still is present in the modern days. Breton wrote:

“Mexico, half-awake of its mythological past keeps evolving under the protection of Xochipilli, God of the flowers and lyric poetry, and Coatlicue, Goddess of the Earth and of the violent death (…) This power of conciliation of life and death is without a doubt the principal attractive that Mexico offers. This keeps an open record of endless sensations, from the most benign to the most insidious”. (Mexico Desconocido)

He noticed that Mexico still lives in this magical atmosphere that is meant to clash with the modern ideologies but instead they seem to co-exist in perfect harmony, resulting in a surrealist experience (Alanis).

Invited by Breton and Frida Kahlo, the French poet Alice Rahon arrived to Mexico in 1939. It was shortly after she arrived to the country that her career as a visual artist started (MAM). She became fascinated with Mexico and became a Mexican citizen in 1946 (Andrade). The main influences in her work are her travels and experiences in Mexico: the landscapes and nature, myths and legends, and the Mexican festivals (MAM). Along with artist Wolfgang Paleen she later pioneered in abstract art.

Later on, in 1943, the British surrealist painter Leonora Carrington arrived to Mexico and stayed for the rest of her life. She immediately fell in love with the country and we can clearly see that most of the elements she includes in her paintings are inspired by the Mexican spiritual and cultural traditions (Frank). We can observe fantastic creatures involved in mysterious rituals and scenarios full of encrypted symbolism. Other cultural influences involved in Carrington’s art are Celtic literature, Central American folk art, medieval alchemy and Jungian psychology (The Art Story).

Within the rainforest of Xilitla, San Luis Potosí, rests a surrealist garden with mystical concrete sculptures, bridges, winding walkways, ramps, natural waterfalls and pools. One can also find surreal concrete structures, to name a few: “The House on Three Floors Which Will in Fact Have Five or Four or Six”, “The House with a Roof like a Whale”, “Staircase to Heaven” and “Road of the 7 Deadly Sins”. This garden is called “Las Pozas” (The Pools) and was created by the British poet and Surrealism enthusiast Edward James. He traveled to California searching for an idyllic place for him to be able to focus on his writing but he found in this magical Mexican landscape the inspiration to build this garden, which will end up being one of the XX century’s most expceptional works of architecture (laspozasxilitla.org).

Last but not least, the French model Bridget Bate Tichenor arrived to Mexico in 1953 and decided to live there for the rest of her life. Her works were inspired by the experience of the diverse cultures she lived in, occult religions, and Mexican mythology (Enrico).

And why is Mexico a Surrealist country by excellence? I extended this question to some fellow Mexicans and these were their replies:

“One factor that makes Mexico surreal is its magical and diverse landscapes: tall trees that tower over you, windy hilltops that carry stories, old cities, green fields bursting with life. The scenery makes your imagination go wild. Another factor is its beliefs. Most Mexicans are Roman-Catholic, however, folklore and superstitions are strongly embedded in our culture. We are also prone to storytelling, and sometimes, we get carried away with our audience’s excitement and even add a little something that will make our anecdotes more fantastic or intriguing. Even many atheists and skeptics can’t deny there’s something magical about our land and our grandparent’s stories, and we half-heartedly expect weird, supernatural things to happen to us. We wouldn’t be that surprised if they actually occurred, and we’re kind of disappointed when they don’t.”

“ The beliefs of our ancestors on the stars, trees, animals and plants have survived in our culture. In my opinion as a scientist, there is also the familiarity among Mexicans of magic even now in times where we have access to information and technology. Some of my patients who come from various rural zones have told me stories about demonic possessions, anthropomorphous animals, miraculous cures, divine apparitions, witches and haunted houses. They accept these things and incorporate them to their daily living.”

“Surrealist is to watch the Voladores de Papantla (Papantla Flyers) representing how their gods come down from the heavens. It is the mathematical perfection of the Sun Pyramid in the equinox where in a corner the figure of a snake appears representing the arrival of the Feathered Snake (Quetzalcohatl). It’s the Mayan Calendar that is more precise than the Europeans’. “

Mexico is a huge country in which each of its 31 states offers unique stories, landscapes, people, traditions and folklore. It is amazing how one can find in the same place a huge skyscraper in the middle of the city and a few kilometers apart the pyramids of pre-hispanic civilizations that are still present in the spirits of many Mexicans. We speak to the dead and celebrate them with colorful altars and food. It is a country where many can take their zodiac sign with same seriousness as their Christian religion. It is where imagination is contagious; where the unexpected and absurd is part of our daily living. There is no doubt why in addition to finding peace, various artists found in Mexico a source of inspiration for their work. It is a place where contradictory streams of thought flow together to create a surrealist country with a surrealist culture.

Why this is not a pipe