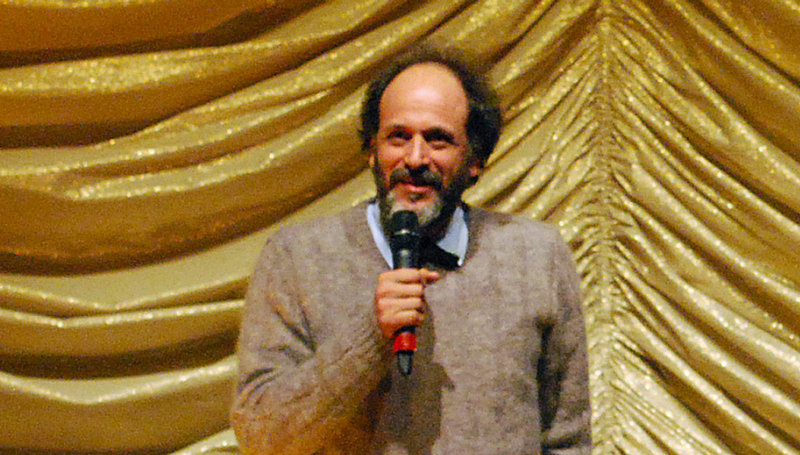 Though Luca Guadagnino has of late become one of the cinema’s premier aesthetes, his demeanor when speaking about his work resembles a producer rather than a director of his renown. In interviews, he is just as inclined to spend ample time delving into minutiae of production design in his works as he is to rhapsodize the influence of aesthetes such as Bertolucci on his cinematic education. Indeed, many of his recent projects as director have spawned from him ‘reluctantly’ taking the reins when no one else would, moving easily from the producer’s chair to the director’s. And yet his body of work br¬¬eathes with a joy and a love for the cinema which, like all great cinéastes, has the potential to penetrate the material work of craftsmanship, always striving to access something deeper. A self-described “stalker of master filmmakers”, Guadagnino’s films use their myriad influences to create an atmosphere, seeping into the fabric of his films and, as a result, passing by almost unnoticed. Much like his beloved Jonathan Demme, Guadagnino has honed his wealth of knowledge and reverence for both film history and craftsmanship into a precise tool, evolving over the years – like his master before him – into a true chameleonic presence in modern commercial cinema. However, at his most opaque, Guadagnino’s films can almost feel stillborn. Such is the case with A Bigger Splash, which attempts to rope together a commentary on celebrity and the then-emerging European Migrant Crisis, all while positing itself as a loose remake of the 1969 film La Piscine with a titled indebted to pop artist David Hockney. Splash feels like it wants to encompass so much while failing to probe any of its topics deeply, achieving little more than its namesake.

By comparison, Guadagnino’s most recent films bring their respective influences to the forefront: the frank European romances of Pialat and Rohmer suffuse Call Me By Your Name with a distinctly occidental sensuality, while Rainer Werner Fassbinder’s mature output of the mid-70’s is refracted towards strictly horrific ends in Suspiria. And yet these inspirations do not serve simply as “window-dressing” for an adaptation, but seek to place each narrative in their respective eras. Call Me By Your Name takes place in the summer of 1983, the year of Pialat’s seminal À Nos Amours and Rohmer’s Pauline at the Beach, and the aesthetics of both Pialat and Rohmer is so deeply felt that, for viewers who’ve seen those other films, one feels a sense of kinship among them and Name which transcends detailed production design and clever soundtrack choices through an astringent verisimilitude in shot composition and editing. And, like Name, Guadagnino’s upcoming remake of Suspiria seeks to recall its own lost age. Unlike Argento’s original, which is set in Freiburg and draws from the rich history of Germany’s Black Forest to fashion a Gothic veneer around what is undoubtedly still a ‘giallo’ film, Guadagnino shifts the setting to Berlin and his style towards the undeniably drearier, more character driven mid-70’s output of Rainer Werner Fassbinder (i.e. Chinese Roulette or In a Year of 13 Moons), grounding the film in its corresponding cinematic era – call it Guadagnino’s own grotesque spin on the “decade of the great Fassbinder”1.

It is important to note that, while Guadagnino’s influences harken back to an earlier, “golden age” of European art cinema, his best films deftly thread a needle from this bygone era to current trends in American Independent Cinema. Due to the success Name found at Sundance in particular, the audiences for his films have expanded beyond the arthouse crowd to include those hungry for the mainstream queer cinema – freshly blossomed from the fruits of the New Queer Cinema of the early 1990’s – as well as those eating up the latest wave of art-inflected horror, for whom the promise of 2008’s Let the Right One In has been fulfilled by such masterpieces of mood as It Follows and The Witch. Guadagnino’s current position gives him the uncommon potential of providing these avid filmgoers with an accessible entry-point to a lineage in the medium’s history which they may not be aware of, whilst neither coming across as indulgent or patronizing in the process. Only a master orchestrator could perform this balancing act – one whose talents balance the warring impulses of director and producer to bring a breath of fresh air to Hollywood’s current state of stagnation and malaise.

1. Guadagnino’s own words, excerpted from the Venice Press Conference for Suspiria, September 2018.
Sean Brennan is obsessed with the ways people consume and experience art, whether on the concert stage, in the theater, or at home. Born in the suburbs of Chicago and shaped by both his experiences there as well as his studies at Berklee College of Music, Sean wishes to explore the liminal spaces connecting the disparate artistic traditions and genres which shape his experiences of the world.

The First Assistant Director: Communicator-in-Chief on a Movie Set

A New Lens on Old Film: A Twenty-Something’s Angle on Art House Cinema

GUADAGNINO – CINÉASTE DE AUTRE TEMPS, or the death of the auteur and rebirth of the artisan