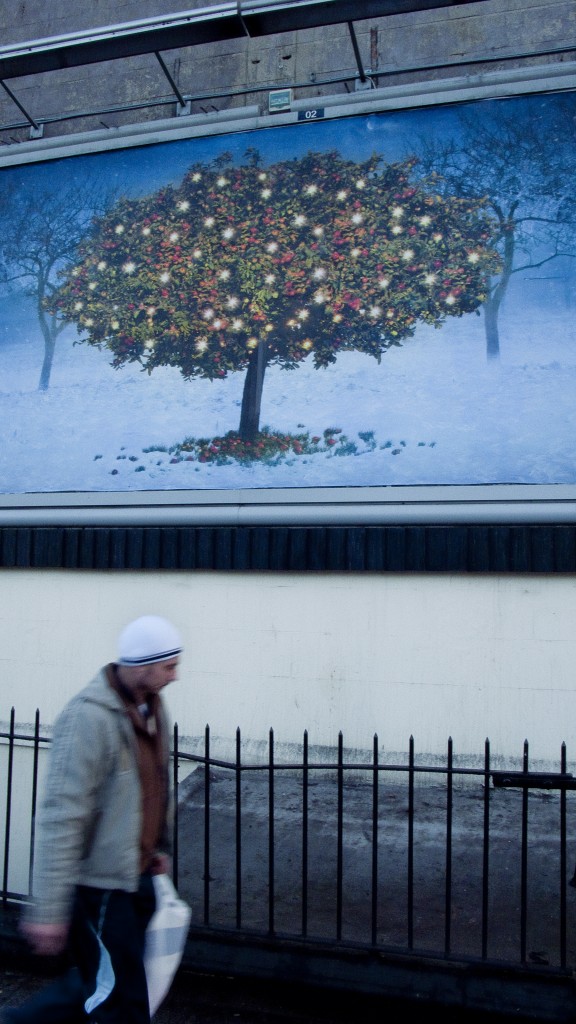 A YOUNG WOMAN walks along a painted line as if walking an invisible tightrope. She is
dressed in DARK CLOTHES, with a LONG CAPE that goes down to her knees. She carries a
SACKCLOTH BAG on her shoulder.

As she continues, words painted on the broken-concrete ground come into view. They read: WARNING: DO NOT CROSS LINE.

She hops from the line and continues to walk alongside it. Above her, and on the other side of the line, a SOLDIER stands on a nearby ROOFTOP watching her every move, RIFLE in hand.

When she reaches him, she stops and takes something from her bag–a WRAPPED SANDWICH. She throws it to the soldier, who snatches it from the air.

She looks up at the soldier, waiting impatiently. A half-smile crosses his stony expression, and he reaches down, briefly out of sight.

He re-emerges with a SMALL BOTTLE of WYBOROWA VODKA, and throws it to the woman.
She catches it, and leaves without a word. The soldier, still with his half-smile, resumes his post.

She continues along, away from the line and across a field.

The grass is long dead, and it is strewn with waste and the remnants of a dying bonfire.
Ahead stands a row of HOUSES in various states of disrepair.

She heads into a driveway and around to the rear of the HOUSE.

An old TELEVISION sits on the counter displaying CNN-style news footage. The sound is off;
images of war appear on the screen in rapid succession–tanks rolling, tracers firing over a city at night, etc.

A scrolling news-feed at the bottom of the screen reads:
TALKS BETWEEN ALLIED AND AXIS LEADERS STALL…EU DEFENCE SECRETARY – “WAR TO CONTINUE AS LONG AS NECESSARY”…UNEMPLOYMENT HITS 21%…AMNESTY INT. CALLS FOR CLOSURE OF INTERNMENT CAMPS.

A YOUNG MAN sits at the KITCHEN TABLE. He taps his foot, apparently agitated, and takes deep, almost strained puffs on his CIGARETTE. He wears a LONG COAT.

The young woman comes through the BACK DOOR. Hearing her, he stubs out the cigarette
and attempts to quickly compose himself.

She is TESIA and he is ALEX, both natives of Poland. They speak in Polish.

He nods, dismissively. Tesia turns off the T.V. and goes about unpacking her BAG, containing TINS with no labels and MEAT wrapped in BUTCHER’S PAPER. Alex watches her as she unpacks. Sensing him watching, Tesia turns. She holds his gaze, before she smiles to him. He smiles back.

Her smile falters, as she notices something. A packed ARMY-GREEN BAG, by his feet.

He hesitates for a moment, before reaching into his inside pocket, and casually tosses some papers on to the table–two POLISH PASSPORTS.

Tesia is stunned in silence. She picks one up, and opens it. It contains her photo, and details with an address in Poland–a very convincing fake. She quickly pockets it.

Alex gets up, and shoulders the bag before she can respond.

He offers her his hand, but she hesitates. Reluctantly she takes it, and he immediately leads her towards the door.

Tesia and Alex exit their driveway, with Alex leading the way. He keeps one eye on the
SOLDIER, who’s watching them from the other side of the border line.

They turn a corner down a lane, and head deeper into the ghetto.

Tesia and Alex move hurriedly through. Alex scans the scene as they go, hardly aware of the reluctant Tesia.

They navigate PASSAGEWAYS and NARROW STREETS. The walls are covered with GRAFFITI of all languages. Makeshift CLOTHES LINES hang between buildings.

They pass tattered PROPAGANDA POSTERS with Soviet-esque imagery. One POSTER features the silhouette of a pregnant woman, and reads, in multiple languages:

The passages are largely empty, bar a scattering of HOMELESS-LOOKING MEN. TESIA takes it all in as if seeing the ghetto for the first time.

They come to the edge of a PARK, now wild and overgrown. They approach the gate; it’s CHAINED shut. Alex pushes the gate against the chain, easily making enough room for Tesia to pass through. She does so reluctantly, and he follows.

They move quickly along a narrow PATH with TREES on either side. There are no longer any people around; they are completely alone.

They slow as they reach a small clearing, where the path diverges three ways–left and right, back into the woods, and straight ahead–through a LONG TUNNEL that runs under an old, disused RAIL LINE.

As they approach, a LINE on the ground comes into view, between them and the tunnel. It’s marked by the familiar words–WARNING: DO NOT CROSS LINE.

Alex averts his gaze, looking down. Tesia follows his eyes to a dark stain on the ground. It looks like BLOOD.

Leading from it is a small trail of blood-drops, towards a patch of UNDERGROWTH nearby. Tesia approaches slowly. As she does, a dark shape comes into view–a BODY.

It’s a young soldier, his body barely concealed under the brush. His eyes open, staring into space.

Realising something, Tesia turns. She rushes back towards Alex, and pulls open his coat.

An expanding patch of BLOOD stains his shirt at his side. She touches him, and his body tightens in restrained pain.

She looks at Alex with alarm, and he looks back only with shame.

It’s not as bad as it looks.

Neither seems convinced of this. He delicately closes his coat, covering the wound.

He again offers her his hand, now dotted with blood. She takes it and offers a feigned smile, fighting back tears.

They cross the line, and head through the tunnel towards freedom.

Tesia and Alex walk hurriedly along. Alex is noticeably pale, a slight limp creeping into his stride.

Tesia takes Alex’s hand, and offers him a more hopeful smile than before. He smiles back reassuringly. They look ahead, seeing something that takes the smile from their faces.

A UNIFORMED OFFICER approaches. His UNIFORM is dark and he wears a CAP, reminiscent of the Nazi SS, and there is a GUN holstered to his waist.

He sizes them up as they approach, and nods as they pass.

They pass each other, but as they continue on the Officer slows in his tracks and turns.

They continue, ignoring his call.

They turn, and the Officer casually walks towards them. Alex reaches into his inside pocket, rummaging around.

Tesia looks down to see the expanding patch of blood.

Tesia looks to the Officer, but he is oblivious, the blood stain obscured by the front of Alex’s coat.

From his pocket Alex produces his passport, and hands it to the Officer. He scrutinises it, then, disappointed, returns it to Alex.

An AIR RAID SIREN rises in the distance. The Officer reacts instantly, already reaching for his gun.

Alex takes off, with surprising energy. Tesia remains frozen in place. The Officer raises his gun. All Tesia can do is watch as the Officer fires TWO SHOTS into Alex’s back.

Tesia gently turns his body over. Alex lies motionless with his eyes wide open. She kneels down beside him, her body shaking. She carefully removes her cape, and places it over Alex’s body.
She stands, revealing something previously unseen – her HEAVILY PREGNANT BELLY.
From behind her, the Officer approaches. Grabbing her by the arm, he drags her away from the scene.

The Officer leads Tesia up the florescent-lit hallway. It is long, drab and lined with unmarked
doors. He opens one and leads her inside.

Tesia and the Officer enter. The room is DIRTY, containing a DESK with CHAIRS on either side.
Both are BOLTED to the floor, and the WINDOW is covered with a fine METAL GRATE.
The Officer roughly sits Tesia down in the nearest seat, and exits. She is in a state of shock.
Teary-eyed, she stares off into space.

An officious-looking BUREAUCRAT enters; plain dress and plain expression. He holds a FOLDER under his arm. Hardly taking notice of Tesia, he sets the folder down on the table and takes the seat opposite her.

He opens the folder, examining its contents. It’s some sort of form. He takes a PEN from his inner pocket, and quickly fills in some gaps on the form.

Finally finished, he offers the form to Tesia.

The Bureaucrat impatiently offers her his pen. She scans the document, much to his annoyance.

We see snatches of its content (in English):
“I, Tesia Vanska, consent to…return to CAMP: ADDAMSTOWN…in accordance to state law to await TERMINATION OF PREGNANCY.”

She responds in English, with a strong accent.

The Bureaucrat lets out a sigh, irritated. He withdraws the pen, and assumes an air of false sincerity.

You must believe me, this is the only way.

He offers her the pen once more. This time she takes it. Reluctantly, she signs the document. The Bureaucrat, delighted, takes the pen and the signed document. Tesia’s eyes glaze with tears. She settles back into her near-catatonic state.

In a shot just like that of the opening scene, Tesia walks the painted line. Again she is wearing her long dark cape, concealing her pregnant belly.

She hops off the line, looking out, across the line, through a gap in the buildings and out into the open country.

Above, on a nearby rooftop stands the same YOUNG SOLDIER from before, surveying the scene.

Tesia takes a WRAPPED SANDWICH from her pocket, and throws it to the soldier.

As he reaches up to catch it, she runs flat-out through the gap in the buildings. She’s past the soldier before he has time to react.

He immediately reaches for his RIFLE, aiming at TESIA as she takes off into the distance. He gets her in his sights, but he hesitates.

He follows her in his sight, but doesn’t fire, his finger twitching on the trigger.

A SHOT rings out, echoing for miles around. Tesia stops in her tracks, her body frozen, her eyes again shut tightly.

She spins around, looking back. ANOTHER SHOT rings out.

The soldier stands, his rifle pointed, not at Tesia, but straight in the air.

She takes off again, running across the fields and finally out of sight.

The soldier lowers his rifle. The piercing STATIC of a WALKIE-TALKIE is heard, startling the soldier.

He snatches his WALKIE-TALKIE from his BELT.

(In Irish)
Were shots fired? Report. Over.

(In Irish)
False alarm. Nothing to report. Over and out.

High above the soldier’s head, an IRISH FLAG flutters in the breeze.

David O’Reilly (“Addamstown” and “Strangeland”) is a graduate filmmaker at the Huston School of Film & Digital Media at NUI Galway, Ireland. Although he specializes in digital video editing, he has a number of short drama and documentary projects to his credit, having worked in a variety of roles, including director. He has written a number of produced short film scripts, including Freegans, and The Mule, which he also directed.

Fionán O’Connell Born 1961. Trained as a Primary School teacher. Self-taught in photography. Married to Paula with two children Oisín & Laoise and living in Dublin, Fionán has been making a living from his work for twelve years. He has directed several television documentaries: Silverfish Productions’ The Goat in The Temple, MOS Productions’ Good Man Mary, Windmill Lane Pictures’ A Quiet Revolutionand In Search of Europe.