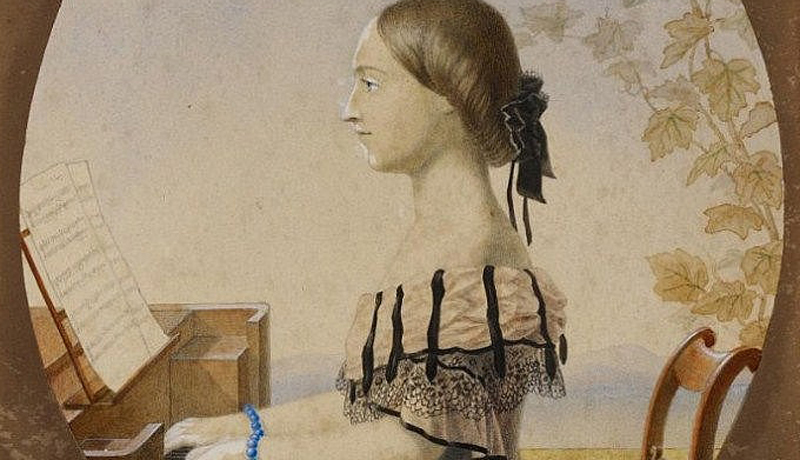 Genius has always been a heavily debated subject. What is it? Who has it? Why are some people more gifted than others? However, when it comes to the female genius, the past centuries have yielded but little answers. Partly, because genius within female creators is not recognized. Also, because the history of the Western World has often been described in dichotomous terms: Good and Evil, Right and Wrong, God and the Devil. As a result, our thinking in The West is often characterized by polarities. For example, throughout a large part of our history, women have been described as emotional and irrational. Men, in contrary, have been characterized as intelligent and rational. Also in music, women are discredited for their musical output. When a woman is exceptional within the musical realm, she is complimented for ‘playing like a man’ or ‘sounding like a man’. However, when a man is exceptional, he is a genius. Certainly, there is a double standard here that needs to be scrutinized. In this essay, I will explore the history of female composers and also, what the men whom we regard as ‘geniuses’ today, said about the female creator.

Hans von Bülow, who was a composer himself, did not believe in the female ability to compose. He expressed the zeitgeist of the 19th century when he said that, “Reproductive genius can be admitted to the pretty sex, but productive genius unconditionally cannot… There will never be a woman composer, at best a misprinting copyist…I do not believe in the feminine form of the word ‘creator’” (Pamela Susskind, Clara Wieck Schumann). This is ironic in a way, as he was one of the students of Friedrich Wieck, the father of Clara Wieck Schumann (who will be mentioned later in this essay). He must have known Clara’s work and recognized the compositional genius of her writing. But as was common, he didn’t fully acknowledge her work; she was only a member of the “pretty sex.”

Immanuel Kant was strongly opposed to the idea that women could become composers. He believed that women who pursued such a career “might as well even have a beard; for perhaps that would express more obviously the mien of profundity for which she strives” (Immanuel Kant, the Beautiful and Sublime). Again, as is so common in Western thought, the differences between the sexes is used to create a dichotomy. Kant believed that the intellectual abilities amongst the sexes were complementary, “The fair sex has just as much understanding as the male, but it is a beautiful understanding, whereas ours (the understanding of men) should be a deep understanding, an expression that signifies identity with the sublime” (Immanuel Kant, the Beautiful and Sublime). Kant’s theories on the education of women were typical for his time. He repeated what many people of his era said, namely that women should be brought up to take care of men. In his opinion, investing in the intellectual capacities of a woman was futile. Instead, women should focus on their feelings and develop a sense of taste.

Another great philosopher and supposed “genius” was Arthur Schopenhauer. Though both his atheistic metaphysical and ethical system are truly insightful, his ideas about the female intellect, are painfully foolish. He claimed that women were not able to think in abstract terms and that they were incapable to become creators of any sorts. In his opinion, “Women can have remarkable talent, but not genius, for they always remain subjective” (Payne, World as Will and Representation). Like Kant, Schopenhauer thought that women should be educated to become housewives. In his essay, “On Woman” (Schopenhauer, On Woman), he compares women to the female ant who, after mating loses her wings. Similarly, he argues, women lose their beauty after giving birth to their first child. It is striking to see that a man of such brilliance has trouble to formulate objective, rational arguments when it comes to understanding the female intellect.

Though the men who have been regarded as geniuses have often disregarded women for their intellect, there have certainly been many female composers. Regrettably, they are not commonly known. However, women such as Barbara Strozzi (1619 – 1677), Clara Schumann (1819 – 1896), Fanny Mendelssohn (1805 – 1847), Ethel Smyth (1858 – 1944), were (and still are) distinguished composers and importantly: they were alive at the same time as the commonly known male composers, such as Wolfgang Amadeus Mozart (1756 – 1791), Beethoven (1770 – 1827) and Wagner (1813 – 1833). When you start discovering the variety of female composers who lived throughout our history, one cannot do otherwise than conclude that the claims of distinguished thinkers are simply false:
Women composers are not non-existent. In contrary, they are nothing new. So why is it that we do not know of or about them? Why is it, that when you don’t know about Beethoven in The West, you are regarded as an uncultured person. But when you haven’t heard about Ethel Smyth, you are just one of many. Are we responsible for the ignorance of others?

Clara Wieck Schumann, (‘Wieck’ not being recognized by spellcheck, whereas ‘Schumann’ is), was one of the best-known female composers and is still known to this day. When she was a young child, her father, Frederick Wieck, discovered her musical talent and he invested in her education (Carol, Clara Schumann). He gave her piano lessons and made sure she studied many hours. When Clara met Robert Schumann, she had already written a number of pieces. However, after marrying him, her dedication to composition withered. A mother of eight children, she focused her attention on performing as a pianist. Though the relationship between Clara and Robert was harmonious, there were certain compromises she had to make in order to keep the marriage alive.

Denying that every woman, at some point in her life, thinks about child rearing as opposed to pursuing and developing her talent, would be beside the point. Women, indeed, give birth to children. When a husband does not commit himself to the upbringing of a child, there is no other choice for a wife, than to take care of it. This, I think, is one of the reasons why it was so hard for our historic female prodigies to excel. It was certainly not a lack of talent that dissuaded women from a musical career. Instead, as in Clara Wieck’s case, it was her responsibility as a mother that demanded many hours of her day, which, had she not given birth, might have been spent on composing.

Ethel Smyth, born 40 years later than Clara Wieck Schumann, had a passion for composing. In order to study music, Ethel constantly argued with her father, who did not think composition was a realistic pursuit for a woman (Judith Apps, Great Women Composers). Ethel, however, was hardheaded and had an iron will. She eventually convinced him and furthered her studies as a composer. At the time that Ethel was in her mid fifties, the sentiment that women should be treated equally was gaining popularity. In 1910, she published the ‘March of the Women’, a brilliant piece that highlights her political beliefs and the women’s suffrage movement.

Contrary to Clara Wieck Schumann, Ethel never got married. She also had no children to take care of. Thus, she could focus all her efforts on developing her own talents and abilities. She paved the way for many young female aspiring composers.

In conclusion, there have been many highly regarded minds that have spoken negatively about the female capacity to compose. Composers, such as Bülow, and thinkers, such as Kant, Schopenhauer, and Nietzsche thought that women had only one purpose in life: that of childbearing. Their aspiration for intellectual development was highly discouraged. Yet, despite all of this, there have always been female composers throughout history. Sadly, they have often been forgotten, dismissed or ignored. Composers such as Barbara Strozzi, Clara Schumann, Fanny Mendelssohn, Ethel Smyth, were distinguished composers and importantly; they were alive at the same time as the commonly known male composers such as Wolfgang Amadeus Mozart, Beethoven, or Wagner. It is our responsibility as conscious and rational beings to credit those who deserve it. This does not mean that we should discredit the male thinkers and creators. But we should also credit the thoughts and compositions that came from female minds. With regards to those ideas that trivialize female talent: it is inexcusable to base opinions on feelings or tradition rather than on well-constructed arguments. It is a shame that those philosophers whom we regard highly, were not able to see the female composer for what she was, a talented person and in some cases, indeed, a genius.

Currently a student at Berklee College of Music in Boston, I focus on contemporary composition, production and writing. Originally I come from The Netherlands, a country that sparkles with creativity and artistic output. I have a passion for politics and philosophy and as a composer I hope to function as a journalist: writing about the issues of today.
Featured Artwork:
Seidel, Franz. Clara Schumann am Klavier. 1837, watercolor and india ink over black pencil on paper. Invaluable, http://www.invaluable.com/. Accessed October 2016.