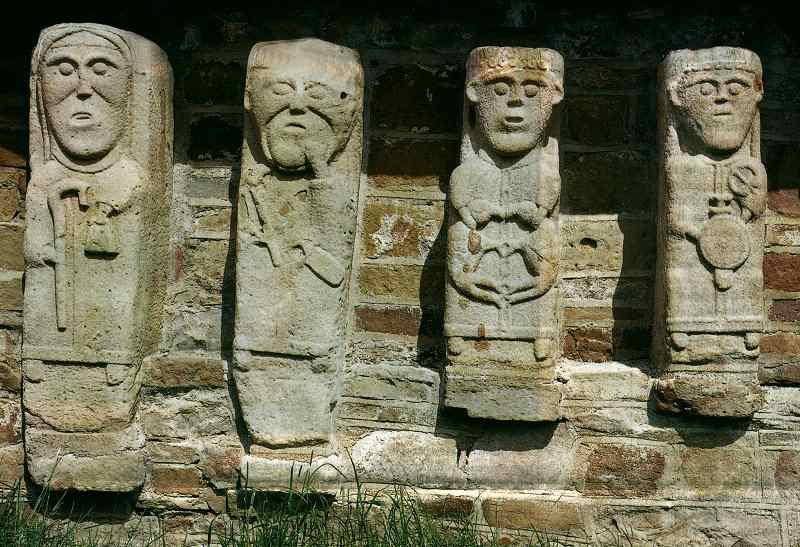 One of the rich traditions of Irish Culture lies in its unique mythology. The emblem of their history is defined by it, and its close ties to the mysticism and beliefs of paganism idiosyncratic to the island. Festivals of celebration, and the tradition of giving one’s self into excess is, at times, a producer of culture that can sparsely be seen in nations considered “civilized,” which is easily demonstrated by the concoction of tales surrounding Fairies, Banshees, and Gods that are fairly native to the populace of Ireland. The Catholic church, which appropriated these images to serve their own needs and undermined paganism in Ireland more generally, is an institution which opposes the values of paganism, preferring a more sterilized, and homogeneous religious mythos, carrying with it its own tendencies towards values footed in moderation, humility and personal restraint. While perhaps this is not necessarily a wholly terrible thing, considering some of the more subjectively and objectively positive things the church has done in modernizing the country morally and culturally, it is my personal belief that the way it altered Irish notions of Spirituality was catastrophic for its culture. In the church’s wake, the Gaelic people have suffered a loss in their connection upon the earth they populate, one which their folklore provided for them. By removing this irreplaceable bond, the church has essentially whitewashed a culture that could sparsely be seen as anything but iconic. Thus it is my belief, that through the appropriation of pagan festivals, which had been integrated into localized Catholicism, the replacement of pagan values with Christianity, and by the stripping of power and importance to the nation’s folklore, Catholicism effectively repressed and stunted the cultural development of a people for generations to come.

Taking a simple look into some of the basic festivals of the Gaelic people pre-Christianity, demonstrates a people with a highly organized yearly schedule, with a time for every celebration and notion of emotion to be properly, and cathartically expressed. The Celts’ calendar appeared to be one based on a 13 month pattern and “began with a full moon”, if we are to follow the historical Coligny Calendar (Eddy). The calendar suggests a year starting in what we now call October, with months giving descriptive titles about what the month’s activities were about, or what life was like, such as Samonios, which means Seed-fall (Eddy). We also see integrated in the calendar, several holidays of differing purposes. The Celtic New Year, Samhain, occurs around the 31st of October (Eddy). It was a fire festival, and “was a time of deliberate misrule and contrariness” (Eddy). This was a necessary time for a people who were preparing for winter, and was consider peaceful, with the warrior class giving up battle until a later festival (Eddy). What one may notice about the date is that it is the same time we celebrate the modern Halloween. It served much the same purpose, but the spirits were not necessarily viewed as spooky as they were today, rather it was a time when they believed ‘the dead could return to warm themselves at the hearths of the living’. The notion of leaving meals for the ornery sidhe likely was transfigured into the picture of a child, asking for sweets or giving out tricks.

The next major festival was Imbolc, which was a celebration for the end of the cold winter months (Eddy). This took place around late January and early February, and was replaced with a nationally popular Christian festival, the Feast of St. Brigit (Eddy). Now, according to art historian Pamela Berger, St. Brigit may not have existed, and was in fact modeled on or largely embellished with the Pagan goddess Brighid. Berger demonstrates how Brighid, goddess of grain is tied to Brigit with the statement that

“Until Modern times… a small quantity of specially preserved seed grain was mingled with the first crop to be sown. The straw or stalks of the grain seed were used to make crosses… that were blessed with holy water… Oats… or a dish of porridge was placed on the doorstep.”

This demonstrates a unique tie to the symbolism of the culture, which shows how the church essentially erased the traditions that predated it. It also suggests the possibility that the church may have also simply fabricated the story. In any case it is clear something has been lost here. A reveling in the temporal passage through a weary winter is cause for celebration, and the excitement of sowing the land. A mythos based on relying on a deity as a symbolic exchange, so as to tap into one’s inner ability to live off the land, is one that not only promotes a mindset of communal and self-reliance, but one that clearly overshadows the more surface level and empty notions implicit in the Christian appropriation.

One last festival to look at is Beltain, occurring around the first of May (Eddy). Dialectically opposed in nature to Samhain, Beltain was a fire festival, which focused on fertility (Eddy). Like any celebration at this time in pagan-traditions, one can see the clear connotations to the themes of Easter. While Easter varies greatly in time, the same core values of renewal, and new life are apparent. It’s now known that Easter actually can be traced linguistically to the Teutonic or Saxon festival worshipping the goddess Ostara. While the notions for setting the date for Easter may be unrelated to Beltain, we can nonetheless still see how it inserted itself, in lieu of Beltain, into the culture.

The one major conclusion to draw from this removal of pagan festival culture is a tight relation to the land. Each of these festivals has a deeply connotative relationship to certain procedures that were necessary for the time that they occurred in. They ushered in new mindsets, appropriate for the time of year, and necessary to keep their societies mobile and fluid. The Catholic tradition cannot rightly and openly conform to these relations, mostly because they didn’t spring forth naturally from the Culture, and because Catholicism can, nor does it wish to, address and foster the values of a people’s excess in certain emotional expressions and temperaments. The notion of identity and the relation to the land, is still one that the Irish people struggle with today, as evidenced by such critical works as The Field, and it can hardly be surprising just where this notion historically arises.

Now, there is a curious task in speaking about the nature of the Celtic Folklore. We have three main embodiments of folklore mysticism, belonging to the Sidhe, a supernatural race comprised of fairies, a popular example being the Leprechaun(Waldron). There is also the Merrow, a creature fairly similar to our notion of the mermaid (Waldron). And lastly, of course, there is the Banshee, an omen of death who screams out when somebody approaches his or her final hour (Waldron). It is critical to note the historical import of these bodies of folktales. These tales serve as parables for the people to live in, tales of how to live in a way that, in terms of moral relativity, is most suitable for the people on the island of Ireland. Furthermore, they administer a distinctive representation of the world surrounds them, and their understanding of it. This is most easily demonstrated by the notion of the Banshee. This creatures’ death wail is iconic in all sorts of folklore today, but what is not as well known, is the ancient tradition of Keening. Keening is the tradition of lamenting of the dead by a process of loud wailing, or sometimes singing, by women (“The Irish Funeral Cry: The Ullaloo, Keeners and Keening.”). It’s an expression of the excess grief of a person’s mourning, one that can at times seem like an omen of death, especially considering how poor disease control was at that time. This relational sense of traditional storytelling is a vibrant reminder of how the imaginative plays an important role in the way in showing how a culture sees the world it lives in, and how it sees itself. But exactly how does Catholicism alter this role? According to Waldron:

When Christianity was first brought to Ireland, missionaries could not completely eradicate the long-standing belief in a God-like race of fairies, so the myths were manipulated and reinterpreted to enforce Christian ideals but still remain as a concession to early fairy belief systems. In Irish Christianity, belief in independent spiritual beings was never completely disregarded, but was changed to a belief in folklore.

Waldron goes on to mention that a popular interpretation of fairies came to be that they were no more than fallen angels, which explained their powers. The altering of the myths from the original stories, into Christian ones, did more than simply change the morality or religions of the people, it came to alter the very foundation of how they understood the world around them.

By undermining the epistemological and metaphysical framework the people lived in, it is clear to see how the Church could conceivably alter how the culture was capable of developing in terms of the arts, poetry, storytelling. Essentially a censorship of material and who could say, or what could be said was occurring. One of the most poignant examples of this is the Shocking Transformation of the god Lugh, from a major deity with an important festival date, to the Leperchaun, an icon of Ireland that has little more story to it than that it is a spirit of greed. Fee claims that “After the Tuatha De Danann, were forced underground, Lugh became popular in Ireland as Lugh-chromain, or Leprechaun. Eventually Christians would assimilate him, making him Saint Lugaidh. (Fee) Essentially, the process here is that Lugh the great god, much like Brighid, was tacked on to the life and legacy of a Catholic saint, but he was also turned into a cultural symbol of trickery and utmost vanity and greed. This is hardly the god anybody would want to worship, especially when he had previously been one of the highest-ranking deities. What’s been lost here is essential, as it demonstrates the lack surrounding the character of Christian appropriation. This cultural exchange between the Celtic pagan tradition and the ancestral Catholic Church demonstrates clearly a removal of innovation and understanding, instead filling in the cracks and holes of the world with a one-size fits all mysticism, which hardly allows a people to properly express individual ideals. By shrinking a god like this, the Church clearly undermines with it a sense of the native people’s culture, and this negatively affects the way a people look at themselves, a reflection on a belief, a character or story cycle as a silly invention, ultimately leads a culture to change the way it presents itself in these artistic, expressive mediums. This evident in the acceptance of the altered mythologies and folklores presented by the church, and really articulates just how crippling these side-effects were to a changing Irish pagan society.

It is thusly my belief that, via the evidence of how negatively these events spurred by the Catholic Church were, Ireland’s pagan community would have done better, and enjoyed a more thorough and richer cultural tradition had they not embraced Catholicism with the same tenacity that they used to fend off their other foes and invaders. The complex state of affairs of any historical matrices and its contingent and speculative developments make it impossible to know the truth of this statement. However, it is clear that the perversion of the traditions of Native people can nonetheless not be ignored as anything but backwards and empty.