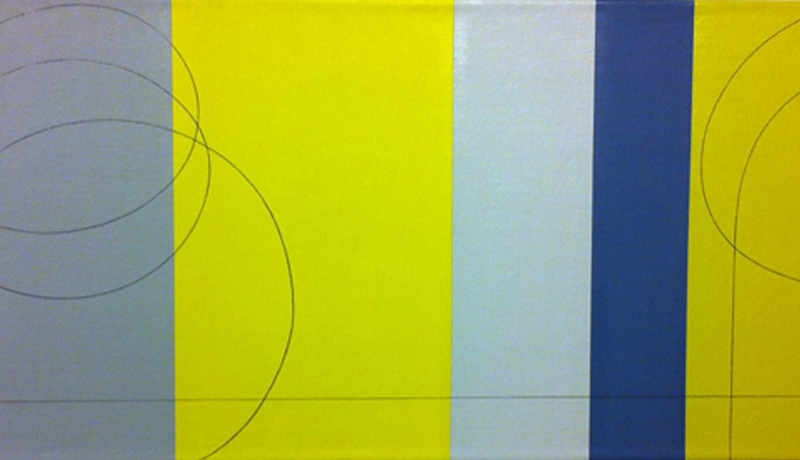 4/4 Common time is anything but common. Pace and rhythmic punctuation varies on and off the quarter note beats. A linear score navigates through and with a sound space realized through an infrastructure of consistent metronomic delineations by way of shape, color, or both. The linear score brings into the mix a directive of expressive points: here, silence, there, pause, now, back, next. Like syncopation, the line engages in twists and loops that settle into the referent tempo offered by formal reference to changing places of departure, resolution, and recapitulation.

The color in these changes is keyed to the arpeggiated line’s travel, block monochrome beats which offers stability and simultaneously act as springboards for further exploration and improvisation. The line courses its way through and gives resonance to already stated sequences and themes. A bend may draw the eye up and over to the other side, or find another sudden turn of events occurring right there in the heart of a saturated color. The seeming overall simplicity may imply a settled motive, until you find yourself at the corner of green and orange. By then, you are off again, only to touch down periodically in the larger score and soar back into the tempo’s color. Along the way the viewer may be
moved to ultimately tap along to these rhythmic tunes.

Chord structures, tonal color, dynamics (pace) and rhythmic punctuation vary through any linear score. The composer/player navigates through and with a sound space realized through an infrastructure of, often, consistent metronomic delineations by way of tempo, chord shapes, color, or all of the above. The linear score brings into the mix a directive of expressive points: here, silence, there, pause, now, back, next. Using the syncopated beat, the line engages in twists and loops that settle into a referent tempo offered by formal reference to the melody (“head” of the tune) and chord harmonies. The score is realized through the changing places of departure, resolution, and recapitulation.

How then to take these musical abstractions and find visual equivalents that become physically present, fixed in time and space but not without their own dynamic and pulse? This first series, 4/4, helped me locate underlying tempo structures where the color in these changes is keyed to the arpeggiated line’s travel, block monochrome “beats” which offers stability and simultaneously act as springboards for further exploration and improvisation. With the new series, 1/3/5, the chord structure (1 being the root of the chord and building up to the third, fifth, seventh, etc.) becomes the operative motif for the sequences and themes. Keep in mind that the seeming overall optical simplicity may imply a settled motive, but one cannot ignore the rhythmic element that keeps the eye and ear engaged in the larger score and its tempo and chord color.” Jim Zingarelli

BEGINNINGS OF A COLORFUL JOURNEY:

I first met Jim Zingarelli, Professor of Sculpture at Gordon College, when he came to me for saxophone lessons. He invited me to a showing of his work and shortly after we began a discourse about jazz, art and life. It seemed like a natural progression to try to try to connect the two in a more concrete way. Jim had a plan of action together and envisaged the Chord and Color 1 3 5 Series. This would involve live music performance of works based directly on the series of 7 painting that Jim was working on. Once we started to discuss the logistics, it seemed like a daunting task for just two people and we decided to embark on finding another collaborator. After a chance discussion with Helen Sherrah-Davies one day, in which I discovered Helen had synesthesia, our trio was cemented.

After several fruitful meetings and ponderings over a very amusing color game that Jim had acquired on a trip to Europe, Helen and I began developing the themes for the pieces, which would go along with the paintings. We both had very different approaches to this unique challenge, as although I have what I can only describe as minimal synesthesia, I had never really used it before in this way. I only really use it when I’m improvising to try to superimpose another tonality over the key the song I’m playing is in. Helen on the other hand has very literal synesthesia where each pitch has a specific color and the hue of the color changes with the octave the pitch is played in. When Helen and I compared color and pitch matches we did amazingly have some overlapping pitch/color combinations.

There are 7 paintings in total. We split them up fairly randomly; just picking the ones we had most affinity with. We talked over what the paintings meant to Jim and then what they represented to us. Fairly quickly we had both given titles to our respective paintings that were different from how Jim had titled them. After a few more meetings and one large surprise for both Helen and I! Jim had used bright blue masking tape on the canvases, which Helen and I both assumed were part of the composition. We were shocked to see the finished paintings without the masking tape. Jim just assumed that since we both knew about art, that we knew artists use tape to segment their paintings. We had a good laugh once the initial shock and surprise had worn off! Obviously it caused us both to have to change parts of our compositions either slightly or dramatically depending on the painting.

Jim had already booked a gallery showing with an opening that gave us the perfect opportunity to try out our first performance. We assembled musicians that we thought would enhance the pieces, had a rehearsal and then the big day was upon us. Having the paintings in the room was a thrilling experience and the audience was very excited to see how the interaction of the music with the paintings would turn out. Our journey was finally under way!

In September 2015 we performed our Synergy show at the David Friend Recital Hall. This presented some challenges, as it would not have been practical in any way to have the paintings in the room live due to their size and delicate nature. Jim opted to have professional photographs taken of the paintings and put together a slide show with different shots and perspectives of each painting. These were projected on the screen behind us as we performed the pieces. The concert was well attended and we received great feedback from many of the people in the audience. Students waited to tell us that they too had synesthesia and imagined that they were the only people in the college who had it. Artists commented on how well they thought the music documented the pieces and gave us some critique on how we could improve the slide show. It was a very productive and satisfying experience. It seemed only logical that we should share our project with our esteemed colleagues during this year’s Berklee Teachers On Teaching and were thrilled when we were granted the opportunity to do just that.

Helen immediately had an affinity with this painting and said that it reminded her of an English summer with strawberries and cream.

Broadly based on the mathematical horizontal aspects, & specifically color/note associations…

Dark Pink = intense Bb#11 – but brief. Back to Light Grey = D7sus4. Dark Pink = still based on Bb but closer to the yellow section so BbMaj7 now… Yellow/Beige = golden expanse of Ab with a little rise to A7sus4 Then the final Bb based sea of RED…we arrive at Strawberry Fair…Bb Lydian

I was drawn to the bold colors and pattern. This painting spoke to me of fiords, cold blue water and bright winter sunshine. 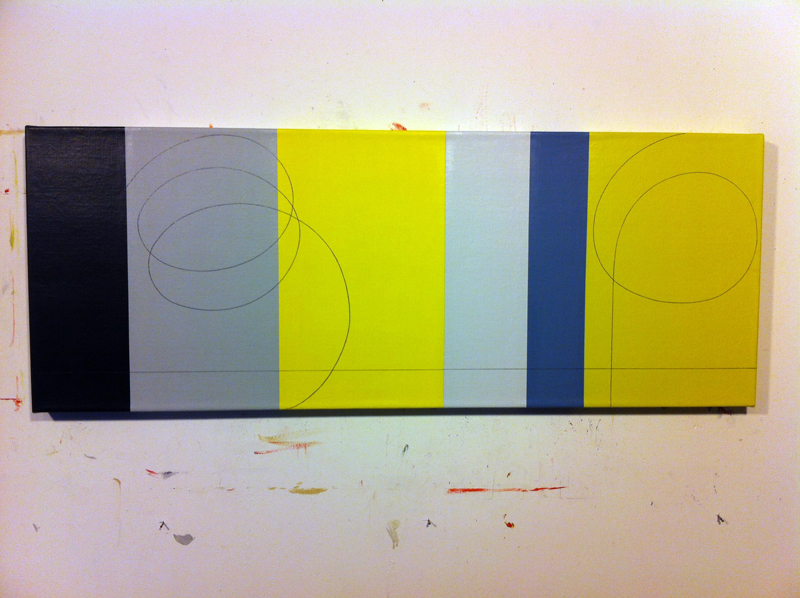 The painting spoke of a glacier, cold mountain air and water and weak winter sun against a gray sky.

Gray section represents the melody or main theme of the piece

With a return to the main theme of the gray.

The intro figure returns this time in D-, which takes us to the solos over the A- in yellow. 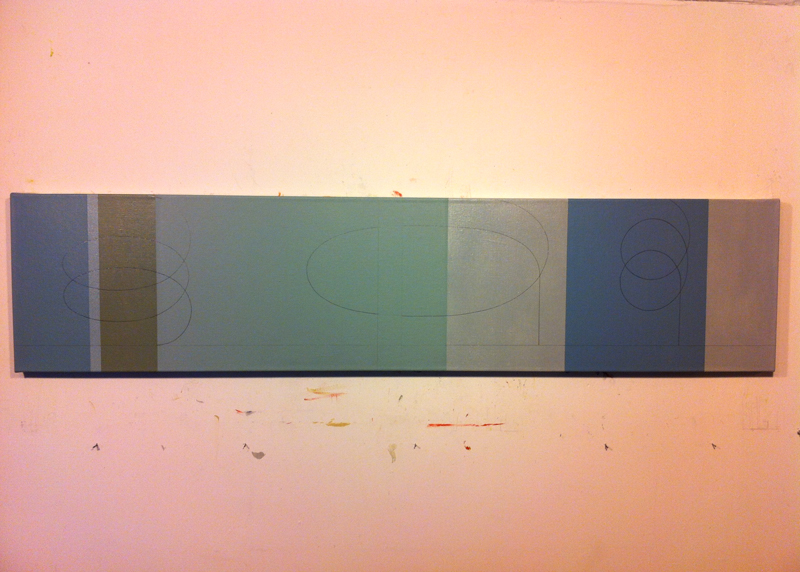 Meters taken broadly from the horizontal measurements of the Picture. Chords taken from the colours.

11/8 Mid Blue = C (alternating aspects of minor/major) Snow looks pretty when it comes down, but it can have a dark side…
3/4 Darker Blue = C# 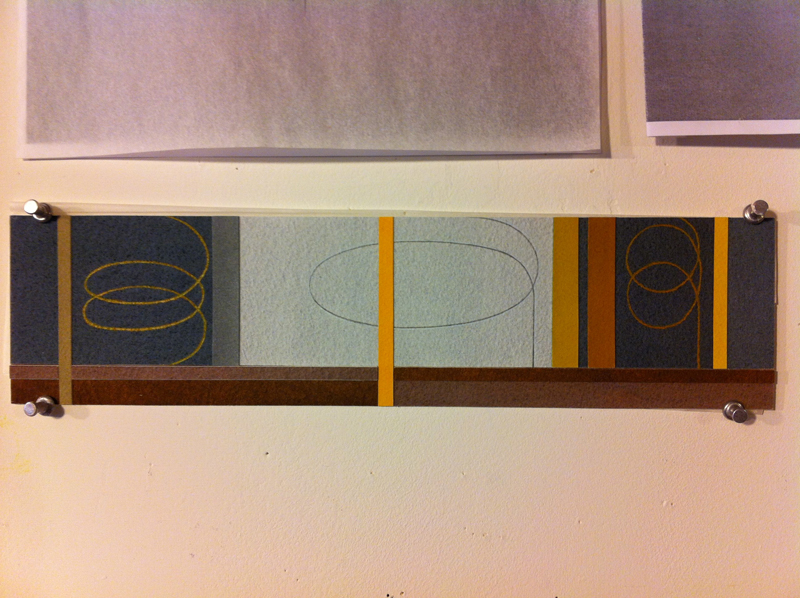 The whole, underpinned by dark browns, F# & F, then after the Solstice moment, inverting to F & F#, as above, so below… This seemed to be like a heartbeat of the Earth… (drums) The whole picture is in homage to the Solstice “standing still” moment in the center – where the drums have their say… the crux of where Eternal time meets the temporal…

The swirls are solos…

The grandeur of the moment, seemed to warrant the cathedral of all keyboard sounds…organ – but with a nod to Messaien in spirit. 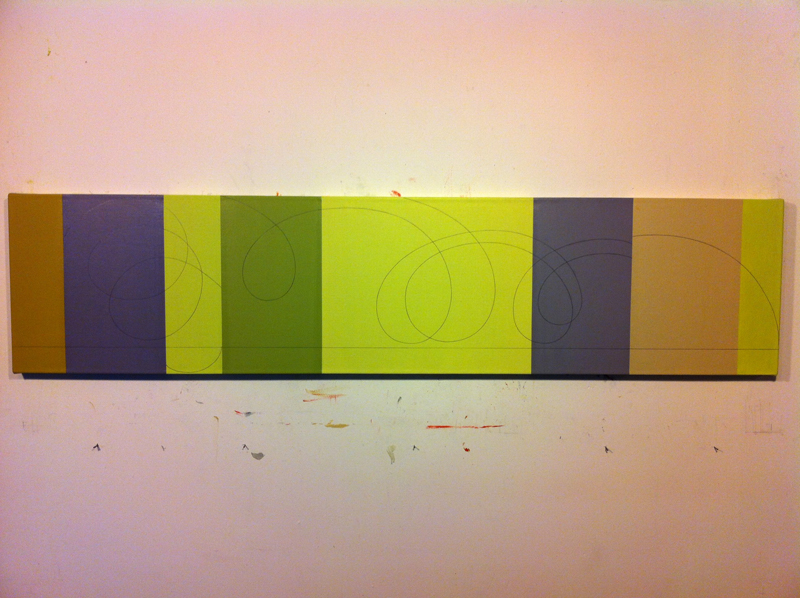 This painting felt like a summer meadow with long grass blowing in a warm breeze. The tranquility is enhanced by the sound of a stream flowing through the meadow – the lines in the painting represent the stream.

Light green – theme at C in E, which moves to dark green in Eb.

Solos in E and Eb represent the long green section.

We then have a recapitulation of the blue theme, brown theme and ending on the green. 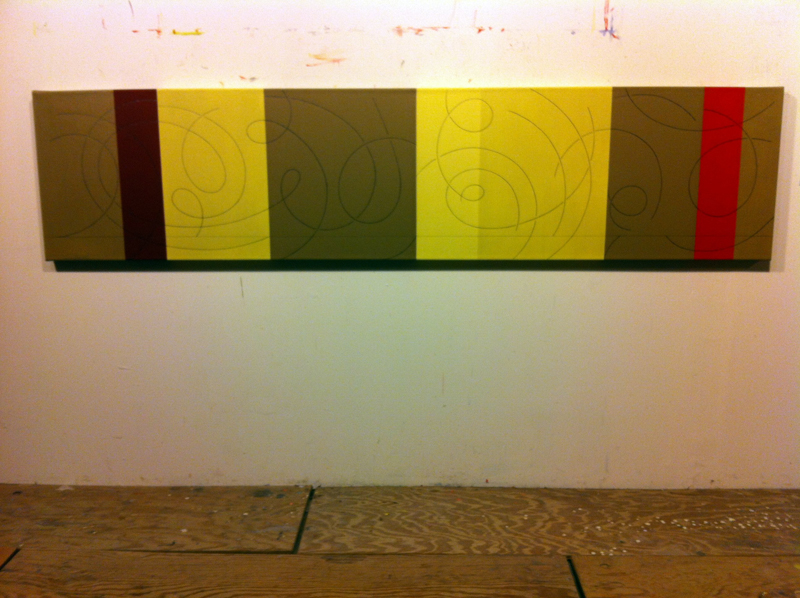 Brighter yellow – solos with stops as ending tag from motif 3

Against The Odds: an Exploration of Bulgarian Rhythms