Skip to content
Winner of the Student Creative Nonfiction Contest 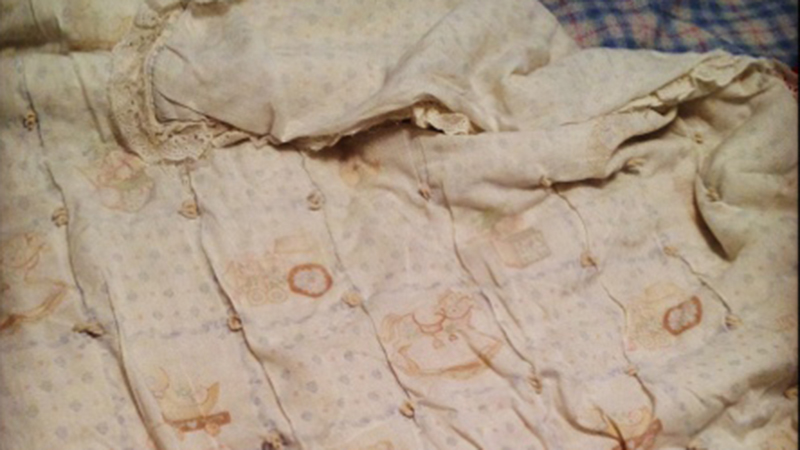 I love my Blankey
She is green and pink and blue
Blankey loves me too
5.

Lissy looked like a real bunny. Not the kind with big, cartoon eyes or a head too large for its torso. Lissy had long floppy ears, a bushy tail, and beady black eyes. I’d let her play the role of Fire Fairy, and I, her servant. Blankey liked to play with us, too, as Lissy’s sidekick. On one side, Blankey was soft, smooth, and white. On the other, she had colorful patches of fluffy fabric and a purple stuffed chicken embroidered in the middle. In the top left corner was a cracked egg with Chicken’s baby in it. My favorite part of Blankey was Chicken’s wings because that’s where she smelled best. I nuzzled my face into the pastel patches of green, pink, and blue and took a deep breath. She smelled like home.

He scrunched up his nose like he did this morning when he threw out the milk.

I’d get really upset whenever my little sister pointed at Blankey and called “her” an “it”. Blankey had feelings too, and I was sworn to protect her.

Blankey and I were playing on my Disney princess sheets when suddenly I ran to the bathroom and a wave of relief washed over me. I felt a warm pool of liquid around me and woke up. Eyes wide and panting, I scrambled for Blankey on the bed hoping she didn’t get wet. Tears started rolling down my cheeks when I found Blankey underneath me, completely soaked. Her nice smell was ruined and now she had to be washed. I wailed as my mom pried her out of my hands. I hated it when my mom washed her because Blankey got thinner every time. That night I made sure I kept Blankey under my head so she would never be peed on again.

My mom walked over from the other side of my hot pink bedroom past the row of glass cabinets, which showcased my collection of fifty or so Barbie dolls. She climbed up the ladder of my pink and white bunk bed and smiled at me warmly while I rubbed my face into Blankey.

“Who would you pick darling, me or Blankey?” My mom asked.

“Blankey of course. I can always find a new mom, but not another Blankey.”

My mom burst into laughter and let out a sigh as she shook her head. What was so funny? Blankey was my everything.

When I first saw “A Charlie Brown Christmas”, I immediately picked Linus as my favorite because he had a blankey too. He dragged his blankey around everywhere and so did I. That’s how I ripped Chicken’s wing. I was taking cross-stitch classes so I took it upon myself to fix Blankey. Chicken’s faded purple wing was detached from its body and had a gaping hole with gray fibers spilling out.

“I’m so sorry Blankey, I know I’m hurting you.”

I grimaced every time I pushed the needle in and out.

“You’ll get better soon, I promise.”

Blankey’s first battle scar was a line of sloppy white stitches that stood out from her murky colors.

“You’re too American. I didn’t raise you to be this way!” My mother yelled at me as I fought through panicked breaths and tears to get an audible word out.

“Just because I want to be independent and do things on my own?! Just because I don’t want you with me every second of every day? Mom, please! You’re crazy!”

“You’re calling me crazy? How could you? You’re so disrespectful. No one values me in this house. No one! You, your sister, and your dad. All of you are annoyed by me. I’ll leave since you don’t want me near you.”

My body heaved and shook vigorously. My hands were cold and lips were numb from biting into it. I tasted tears and iron in my mouth, as I begged my mom not to walk out on me. I gripped onto Blankey and used her to wipe away my tears. Black mascara streaked Blankey’s pale surface, leaving an impressionist stroke. A security blanket for trauma victims, Blankey always made me feel safe. She never left my side.

The sun shone through the window and woke me. I forgot to close the blinds last night again. As my eyes were adjusting to the brightness, my hands reached out to grab Blankey lying underneath my head. For 12 years now, she always found her way towards my head even after I stopped wetting the bed. It became habitual I guess. When I dangle Blankey with one hand now, I can see the weaving of her thin gray threads. Most of her white fluff is gone, and what’s left is either leaking out or clumped together in one corner. Little faded floral patches cover up her wounds. Her now pilled fabric is dull and neutral in color and Chicken has deflated. The cracked egg in the top corner now holds a small circular piece of Velcro, which was used to attach a baby chick. I must’ve lost it a long time ago. She smells like Snuggle laundry detergent, but still looks like a Pollock painting. Food stains, nail polish, mascara, and even faded spots of blood adorn her surface. I folded her up and placed her in the top closet shelf. Maybe it was time I let go? I looked up at Blankey and pulled her back down. Not today.

Myra Molloy was born (1997) and raised in Bangkok, Thailand. She began singing at the age of eight and appeared on multiple stage performances and television shows. Myra is best known for winning the premier season of Thailand’s Got Talent (2014) and a semi-finalist in ABC’s Rising Star. Myra is currently a second semester student at Berklee College of Music majoring in songwriting.