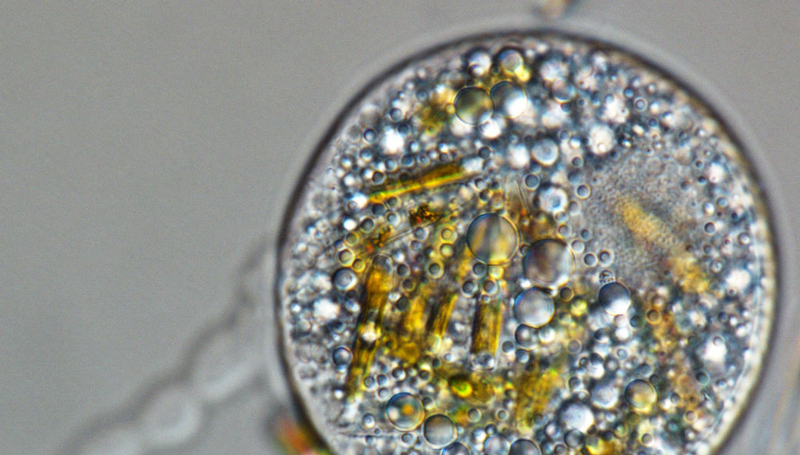 The Amoeba Game
I stood at the stove holding
a wooden spoon in my right hand,
listening to butter sputtering against
the splattered circle of an egg. Perhaps
it was the flapping of the egg’s
wavy edges against the steel pan,
or the amorphousness of its innards
outside the carriage of its brown shell—
I remembered an odd game I played
in Brownies. The amoeba game.
In the front yard of the scout cabin,
one girl at a time would become
an amoeba and lead the rest.
We didn’t know what amoebas were,
only that they weren’t human or animal,
and moved like a thousand blind legs
treading through molasses.
So it was that our heads and arms
became legs and feet, undulating
wayward into dusk. Swaying our shoulders
left to right, we’d giggle through mouths
we weren’t supposed to have, pretending
we had no eyes and didn’t know where
we came from or where we were going.

—first published in Poet Lore
Morning Love Poem
Dreamt last night I fed you, unknowingly,
something you were allergic to.

You don’t have even a single allergy,
but still. The dream cracked. Cars nose-dived

off snow banks into side streets. Sometimes
dreams slip poison, make the living

dead then alive again, twirling
in an unfamiliar room.

It’s hard to say I need you enough.

Today I did. Walked into your morning
shower fully clothed. All the moments

we stop ourselves just because we might
feel embarrassed or impractical, or get wet.

—first published in the minnesota review
Richter Scale, Bucharest
Our first week, you showed me around
your empty capital in a dream. We skipped

Parliament and headed down Calea Victoriei,
lit beeswax candles for the living,

drank jasmine tea at Serendipity, then
a big one hit. I would’ve asked

what happened next, but I was in it, I knew,
I could feel it: you’d have saved yourself

if it weren’t for each day you forget how.
You’re like that musicologist I’ve read about—

seventeen-second memory. Every 3.4
blinks, forgets what he’s forked into his mouth,

his daughter’s name, his own. Every I
he writes, once written, a trick

of someone else’s hand. He remembers
composition, and he remembers his wife.

Every time he sees her he’s seeing her
for the first time in ten years, and he wants

to waltz. Every time she walks into his room
she steps around a box. I am this wife.

I’m stuck in your village, walking
a chicken on a leash. He pecks the ring of sun-

flower seeds around this house on Lavender Street
—lavender in another language. We’re stuck

in November, he and I, waiting for you
to walk into the side yard, past the little black

dog tunneling a lattice of wormholes in the dirt. 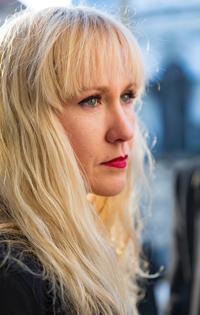 Tara Skurtu is an American poet and translator residing in Romania. She is a two-time U.S. Fulbright grantee and the recipient of two Academy of American Poets prizes and a Robert Pinsky Global Fellowship in Poetry. Tara’s work appears in Salmagundi, the Kenyon Review, Plume, and Poetry Review, and her poems are translated into six languages. She is the author of the chapbook Skurtu, Romania and the full poetry collection The Amoeba Game (Eyewear Publishing). She teaches creative writing in Bucharest.