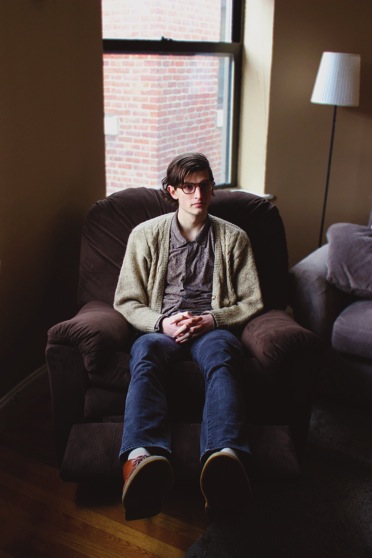 Ever wonder if there actually is good chance of supporting yourself with a music degree and on top of that having the time to keep yourself looking snazzy? Meet Nolan Eley, a fresh-out-of-Berklee grad, who is currently breaking all those stereotypes of BM/BFA college students. During our interview Eley expressed his current transition in life as a “malaise,” but from my point of view he seems very close to achieving his dream of becoming a yuppie. A term I was not too familiar with before I met him. “It’s a young urban professional,” Eley states. “Someone fresh out of college who is living out in a city and who can afford things and do grown up things. Like, go to a job and act like a consumer and go to concerts and things. They have normal lives.”  After getting to know more about Nolan, his involvement in various art and media forms have led him well on his way to this pretty sweet life style. Check out this supper funny interview filled with advice for young adults, places to hit up for shopping, and a crazy funny dream Nolan had that will leave you wanting to be his best friend.

Nolan Eley’s involvement in numerous media and musical projects is the reason why I chose to write about him. He majored in Music Production and Engineering at Berklee College of Music and continues to live in the Boston area. His online artistic outlet on blogspot.com alters between straightforward and thought-provoking opinions on music, books, and photography that is worth checking out. He also holds quite a reputation on Youtube. From acting in short films to arranging/singing a hilarious barbershop song, Nolan is the mastermind in many of these videos that each has over 300 views. Not bad for a guy who calls himself “quiet” and “introverted.”

“I’d rather be forgotten and lonely, but free and real

than be remembered as a slave to the simulacrum of

I continued our conversation with basic questions, which were followed by a look of disinterest. Trying very hard to grasp his attention I asked if he had any interesting dreams last night. A show of excitement and thought finally appeared on his face.

“I was riding the T, the red line, and I saw upfront the lady driver of the train was on her radio and she was saying ‘yeah we had to let someone on the train with his car’. He had the hood of his car with him and I was staring at him. I told him to get off the next stop where I was going off and it ended up being an underground party. My boss was there and he was dressed as a tree and Frankenstein combined and he was flirting with another lady who was wearing the same exact costume as him. And they were both flirting in a weird way that they were growling with their teeth out and inhaling and exhaling and their teeth were growing longer and short and they were both drooling like crazy then they both go into the guys bathroom to hook up and they get in there and it turns out that this guy has an ulterior motive to actually kill the girl and the girl starts turning into pink balls which was completely normal to everyone else at the party. Then he goes into the bathroom stall and somehow cloaks himself and makes himself invisible and floats to the top above the stall and grabs the top of a pipe. And then he goes back down and goes to floor and reaches a towel and whips it to the feet of the girl and it makes her fall and the pink balls shatter and he thinks he’s still got her and killed her but there’s one globe mass of the pink balls that’s still in tact and it starts chasing him into the party area and he runs into an emergency exit to go outside and gets chased by some sort of three stooges guy.”

As soon as he finished his dream, I thought about this decorative-wall piece my mother gave me before leaving for college that said, “Dreams are wishes your heart desires.” I couldn’t help but laugh. “Weird but funny guy,” I thought to myself. I knew I couldn’t base my first impression of Nolan according to these corny words of wisdom written on the plaque because I don’t know a single guy who desires to see his boss to attack a woman in an ugly Frankenstein tree costume. But something about this bizarre dream, made me want to believe he was just a guy with an imagination. As the interview went on, I persisted on trying to hear more behind this creative side out of Nolan. 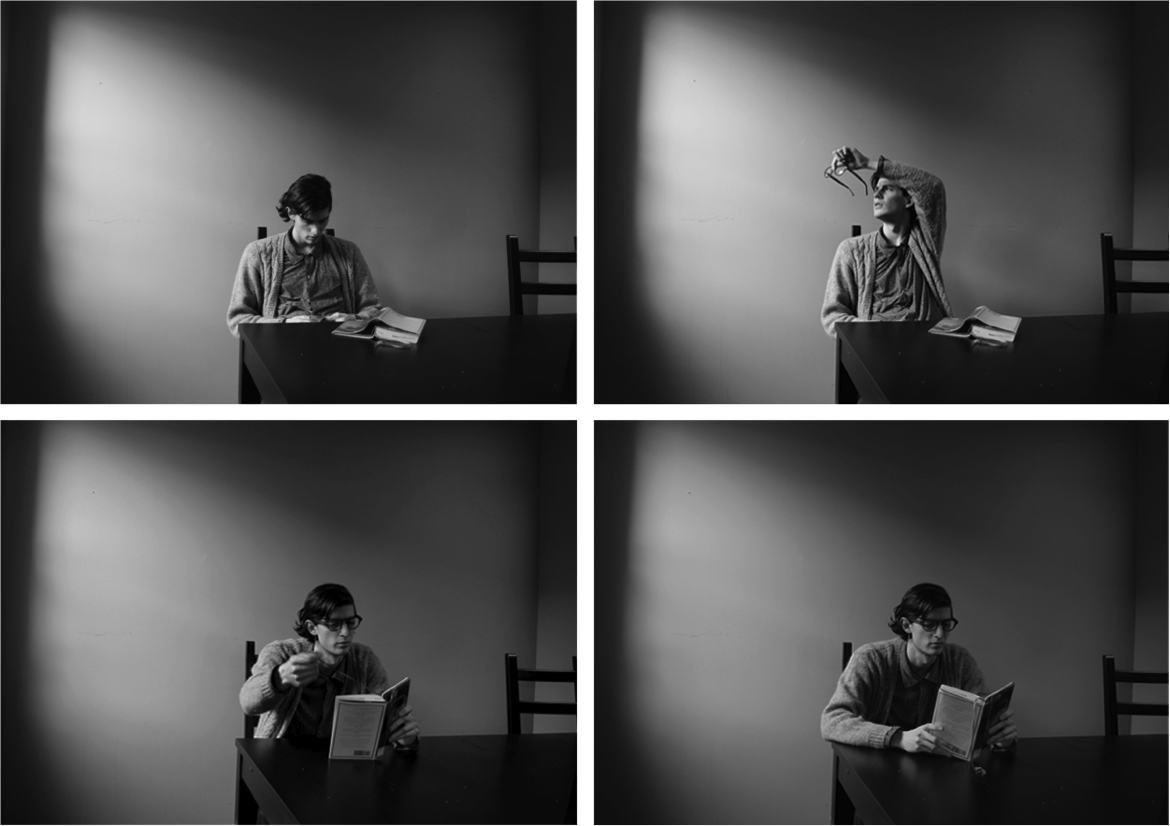 What are you interests?

I like music a lot. I got to shows. I play shows. I listen to music. I create things. I like making music, learning things, searching for the truth. You know the truth is out there. I also like reading. I’ve been reading “The Room of the System” by David Foster Wallace and “Listen to This” by Alex Ross and yeah, that’s pretty much it.

Are you close to finding the truth?

Nooo nooo. I hope not. (Starts to sing Reason by Hoobastank)

You mentioned wanting to be a yuppie last time we ran into each other… can you explain what a yuppie is again?

It’s a young urban professionals someone fresh out of college who’s living out in the city who can afford things and do grown up things like go to a job and act like a consumer and go to concerts and things. They have normal lives.

Is that still a goal of yours?

Yeah, it’s a way of rebellion.

I guess cause most people want to go against the system but I want to be in the system and contribute to society. I want a real job. I’m just doing freelance stuff.

Who or what influenced your fashion style?

Where do you shop?

Alright, you probably have never heard of it. I shop at stores that don’t even exist yet.

The dead rack. Thrift stores mostly. There’s one in Alston called Urban Renewals-that’s probably half of my closet and a little bit of H&M.

Do you put a lot of effort into the outfits you wear every day?

Not really. I usually need help from my roommates, but for the most part I can do it by myself.

Do you think having style is silly or important or both?

I suppose it’s nice to dress pragmatically.  People should know how to dress for different occasions.  I think of fashion from more of a utilitarian point of view.  Fashion can be used to manipulate people’s opinions of yourself.  For instance I think a lot of people think I’m cooler than I actually am.  There’s also knowing what to wear on a date, or to a job interview, or when it’s raining etc.  So I suppose having a style that serves a practical function is more important than spending a whole lot of money every season on what’s new and hip.

What is your favorite article of clothing?

Oh jeez, um there’s this wool cardigan I have that I think my aunt gave to my mom and my mom was going to donate it goodwill but I stole it and it keeps me warm in my cold apartment and it remind me of something Kurt Cobain would wear.

What have you been doing after graduating Berklee?

I’ve been filling my time with playing in bands and recording and producing music for those bands and other bands. I’m mastering stuff which is cool and I’m making a little bit of money and I’m also a music editor for members at the Harvard Music Association and also writing articles and reviews for concerts in the area for The Boston Musical Intelligencer.

I heard that you don’t have a Facebook. Living in a country where relationships are now formed through the Internet, how is not having one going for you?

It’s a wonderful life being off the grid you know, everything I do isn’t automatically shared with hundreds of people. I can do things that don’t have to be subjected with outsiders. I don’t have to live off of that narcissistic high when you see those notifications. But at the same time it’s more lonely. I’d rather be forgotten and lonely, but free and real than be remembered as a slave to the simulacrum of life that is Facebook.

What artists have you recently been listening to?

That’s a good question, hmmm, uhh that new My Bloody Valentine record I’ve been listening to a lot. Shubert piano sonatas and The Flaming Lips and Pink Floyd.

Do you have and plans for yourself in the future?
Ooof, I don’t know. I’d like to get a real job. Or more work of what I’m doing now. Be busier with that. Work on my happiness.

If you were to give advice to a person entering their 20s what you advise them?

To check out some of Nolan’s projects click the links below: