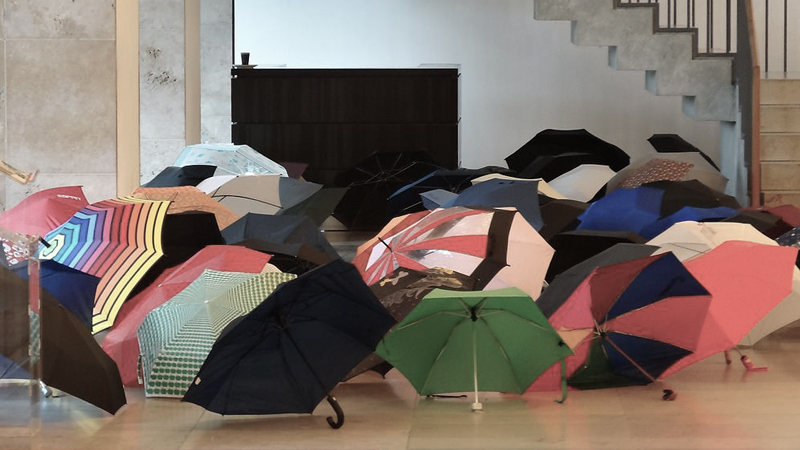 Hong Kong. Although I spent only half of my life there, Hong Kong is my home. I identify as a normal guy from Hong Kong. However, under the rule of the Chinese government, we do not have democracy, and we are starting to lose other rights as well, such as academic freedom and freedom of speech. We fight and resist. It began on September 28th, 2014, a Sunday.

I arrived at Admiralty metro station around 2:30 p.m. with my sister. This place was crammed with people; I could feel the body heat radiating from the crowd. It was still 28 degrees Celsius and October was coming. Bags of supplies bumped my leg, bags full of water, food, goggles, and most importantly, umbrellas. We followed the crowds towards the exit, flowing in small choppy strides, like a family of sardines, swimming in unison, united in silence.

We stepped out of the station. The September sun hit my face. The moisture of the air conquered me, and my nose allergy acted up as usual as I entered an extreme temperature change. Sneeze, sneeze and sneeze, ten blows of my nose again.

We made our way towards Admiral Centre on Harcourt Road, one of the thousands of skyscrapers in Hong Kong. The place was packed. I looked up. There was a rare blue sky in this concrete jungle, though I only got a peek of it inside the crowded city, like a frog looking up from a deep well.

We could barely find a space to stand to see what was going on at the “frontline”: the barriers the police had set up in front of the government headquarters across Connaught Road. No one had crossed the road yet; barriers were made before we arrived by the police in front of the highway.

People started gearing up: goggles, raincoats, and masks, were going through the crowds, we reciprocated this gesture and passed the materials towards the front. All of a sudden, police declared threats to the demonstrators to leave or they would take orders according to the law and power they have. A stronger desire to stay was created in me.

I looked to my right. People were cheering, and then I saw a young man. He was in his early twenties, escorted out by two young men by his side. Eyes shut; face and body drenched in water. He got pepper sprayed. All the protection he had was an umbrella. I could see his pain, but the way he was looking up, he was proud of himself, about what he did, and I was sure he would remember this moment forever. Crowds were cheering for his bravery, and how he stood up to fight against authority, to speak up and express his opinion and rights. Those who were watching in front of the TV perhaps viewed him as a rebellious teen trying to be the “hero,” to cause trouble and destroy the peace of the community. However, I was very sure that no one here would misjudge him as a teen-in-his-rebellion-stage; rather he would be remembered as the John Doe who represented the spirit of Hong Kong’s people.

4:28 p.m., we broke through the police line into Connaught Road; the unassertive me decided to follow the crowd – my first time walking on the busiest road in Hong Kong. We made our way through the slowing cars. Some turned down their windows cheering for us, some emotionlessly dead looking slowly drove past us. A double decker bus stopped in the middle of the road, jamming the road for us. We had help.

The frontline swarmed with people. I could see umbrella walls being built, different kinds of umbrellas, colorful, plain black, some with cartoons or old fashioned pattern, umbrellas from different people of different backgrounds, different ages, protecting people from the wicked weapons of the police.

Umbrellas, a usual tool for daily life. Harmless, supporting us as a walking stick, protecting us from rain and UV, and now becoming the strongest protection we had. Their fragility represented us Hong Kongers. Torn down easily, unable to defend ourselves from physical force. They represented our last shield to fight for our democracy. We came here peacefully, the only “weapon” we had were umbrellas against batons and pepper spray. We would use whatever we had to protect our values.

We shouted slogans, we passed water and umbrellas down to the frontline. We cheered for the wounded. We did everything we could to manifest the values we had for our home.

The next thing we know, a loud staccato bang explosion went off 30 meters to our left. It was like a gunshot, but a more subtle and condensed pop. Grey smoke started pumping out from the bomb; it was tear gas. Screams and noises everywhere. People turned and started running away. Some held onto their umbrellas, some left them behind. Bang. Another one went off. I grabbed my sister and we ran, looking down on the ground and covering our mouths, trying to escape from the cloud pursuing us. But we were too slow; the gas enveloped us. No umbrellas could keep us from harm.

I closed my eyes, trying to avoid any contact with the gas. It was useless. I could feel the same pain I had when I cut onions, but magnified by a thousand times. I tried to open my eyes to look at the road, but I could not do this simple tiny action. My eyelids were forced to shut tight, as I had lost the muscle movement ability of my eyelid. Tears started running down my face. I thought maybe this would help to relieve the pain, but I was wrong. The more I teared up, the more pain I felt. The tears might have been caused by chemical compounds in the gas, but the tears also represented my sorrow towards the state of my home.

I could smell the spicy scent of the gas, an odor mixed with spice rub and the sourness of rotten fruit. My nose immediately went dry and I could feel the burn of the gas in my nostrils, every inch of moisture sucked away from my nose. It was cold, generating a sensation of skin falling off my nose.

It spread through my face. The same burning sensation. My face went numb, like receiving anesthesia, preparing for someone to slit it open. My body began reacting to the chemical; mucus and snot production kicked in. I was basically leaking different liquids all over my face now. I knew I had to resist the urge to wipe my face. I knew it would make the pain even worse.

I could hear my sister murmuring next to me, but somehow it was a blurred muffle. From what I could pick up, she said, “It burns, it burns.” I could imagine that we were both going through the same pain. I pitied her, trying my best to not let her get hurt since she was, in point of fact, a short girl. All I could do now was to wrap around her and keep running. Who knew where we were running to, as long as it was anywhere away from the gas.

We ran and ran and ran. All I wanted now was water, to rinse everything away from my face. I could feel people pouring water around me, spitting water on the ground. At the perfect moment, a girl handed me a bottle of water. She wore a pair of thick boarder glasses, standard Hong Kong girl hair, and a ponytail with a simple split bang. She basically looked like every other Hong Kong girl, but at this moment, she was my savior.

I thanked her and took the bottle of water from her hand. It was open already. I immediately poured the water onto my face; it was like water flowing onto dry ice mixed with acid fire. I felt good. I took a sip of water, rinsing it in my baked and bitter mouth, and spit it on the ground immediately. I accidently spit on my flip-flop. That was stupid. I handed the water to my sister and she did the same. The relief was short-lived, but all I knew was that I was feeling better.

The then crowded place, filled with heated protestors, was soulless. It looked exactly like a warzone: solemn, dreary, dead. Items were left behind, cardboard paper, water bottles, hundreds of broken bent umbrellas, and thousands of grieving hearts. But I was sure that this would not extinguish the fire within us. I believed it would bring more people to come here. It would ignite us, and join in this umbrella revolution, this little thing we could do for ourselves. I knew we might not get what we wanted in the end, but at least we would know we tried and we fought to protect our home and right, rather than regretting not doing anything. This revolution would take time, I didn’t know how long, but I was sure we would keep fighting as long as we could with our umbrellas.

That day will always be in my memory. My first demonstration: a story I can tell other people about Hong Kong. I am proud of myself and all the other Hong Kongers. I am proud about how this busy city could unite to express our opinion. That day was the day where I realized the power of umbrellas. The item I lost every time: how it represents us and protects us, how we are able to be destroyed and rise up again and again.