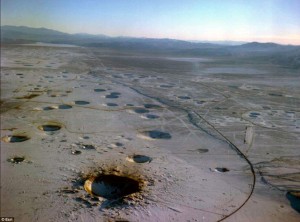 In the deserts of the American wasteland, every living being is always hungry, always thirsty.

Some are fortunate enough to live next to a relatively clean water source where resourceful Roamers erected giant, tremulous windmills to pump water from deep beneath the sands. These fortunate people go to great lengths to protect their precious mills by building great walls around them with scrap metal from ruined pre-war towns. But some people outside their walls don’t have their own source of dirty, yet un-radiated water. One such person is a Grandmother who knitted a red scarf for her granddaughter to protect her from the fierce sandstorms that happen commonly in the deserts. And because no one saw the little girl without her red scarf, they called her Little Red.

In the wastelands, children grow up in a very short number of years. Little Red is no exception. At the age of six, her father taught her to handle and shoot his trusty pre-war 12 gauge. When she turned ten, she learned to drive her parents’ rusty old water tanker and by thirteen, she started making runs out to her grandmothers for her parents, who were growing old and worn out from radiation sickness.

But despite taking on these responsibilities, Little Red was still as naïve as any child her age.

One winter, the sand being blown up by harsh winds made it impossible for Little Red to make a run to her Grandmothers. She hoped her grandmother would still be alive by the time she could bring her more water.

In the deserts of the American wasteland, every living being is always hungry, always thirsty.

The radiation from the fallout of the war had a great effect on the animals of the desert. Over time, all of them died out, all except for the Wolf. The Wolf had mutated, now standing upright on its hind legs and learning the language of the Roamers who wandered the deserts.

Little Red heard many tales of the Wolf. Most claimed it was a savage beast, not thinking twice before eating anyone whole. But Little Red thought that if it could talk, it must be able to reason. So after the storm had settled and she was en route to her Granny’s, she suddenly slammed on the brakes of her old tanker. A lone, furry, bipedal form hunkered on the side of the trail.

The Wolf had been wandering through the golden sea of sand for days, no food and little water in sight. When the tanker screeched to a halt beside him and he saw a young human driving it, his mouth began to drip with saliva. A tasty treat! he thought, theen, but good to feell ‘tumache. Truck must be feelled with water! But the old shotgun sitting beside her made him cautious.

“Heyo Leetle Red!” The Wolf howled, observing her scarf, “Where you be heading with water?”

“Off to my Granny’s!” She replied, timidly.

“Ah! Must be out of water, after weend.” The wolf sniffed the air loudly, “Water you breeng smell awful! Grainny must want better.”

“Yes she does, but this is the best we have.”

“Awwwwoo! You een luck! Wolf know spot where can get good-good water. Wolf passed small oasees. Good-good water come out of hole een sand. Wolf have no way to carry with so took few mouthfuls and left.”

“Really?” Little Red’s eyes widened with excitement. “It must have been brought up by the storm! Where’s this oasis?”

“Only some miles past heell.” The Wolf pointed toward a dune in the sand. “Should only take half hour to find.”

“Thank you Mr. Wolf! I’d take you along with me, but my Grandmother’d be horrified if she saw me with you. I’ll give you some water if I pass you again.”

“Do not worry Leettle Red. Go get water for Grainny!”

So Little Red rode off in search of the oasis. When she was far enough away, the Wolf turned down the trail in the direction that Little Red was heading. Eef Wolf get to Grainny queeckly enough, can munch Grainny whole, then take Leetle Red by surprise and munch her too! And Wolf weell have full tank of water to self! He ran as fast as he could, eager to get to his feast. He eventually reached a rusty little shack with a grimy water tower and a small water tanker with no wheels out front.

The wolf ran up to the tanker and blasted the horn. “Grainny!” He screamed out in falsetto, “Ees Leetle Red here to breeng water after weenter storm!”

No response. The Wolf grinned a sly toothy grin.

The Wolf entered the shack, kicking dust up off the floor. Daylight pierced through the darkness onto a shabby mattress in the corner, atop was Granny, dead and curled up in a raggedy blanket. The Wolf approached the body, drooling as he inspected it.

Steell warm. No deeath smell. Must’ve just deead. Without any hesitation, the Wolf ate her up, throwing her raggedy clothes and blanket back on the mattress.

From outside, the Wolf heard the low rumble of Little Reds motor approaching. He threw on the old woman’s clothes, and curled up on the mattress, wrapping himself in the blanket. Little Red honked her horn.

“Granny! It’s Little Red here to bring you your water! And this water’s fresh from an oasis!”

The sound of Granny’s voice worried Little Red. “Her throat must be dried to a crisp!” She slung the 12 gauge across her back and grabbed a dust covered jug from a pile of sand next to the water tower, filling it up from the spout on her tanker.

She ran into Granny’s shack, jug of water grasped tightly to her breast, and stopped in the open doorway. The curled form peering at her from the shadows on the mattress looked very peculiar.

“My, Granny, what big ears you have!”

“And Granny, what big eyes you have!”

“But Granny! What sharp teeth you have!”

The Wolf sprang out of bed and bounded at the girl. Swiftly, Little Red flung the water jug at The Wolf, hitting him in the gut. The Wolf keeled over, the wind knocked out of his lungs. With practiced swiftness, Little Red whipped the shotgun off her back, released the safety, and put the end of the barrel to his temple.

“What have you done with my Granny!?”

They both stood frozen for a few seconds, the Wolf gasping for breath, and Little Reds eyes burning with fire. Finally Little Red lowered the shotgun away from the Wolfs head. “Fine. I can’t blame you, but I won’t help you since you ate her. You’ll have to fend for yourself.”

She pulled the old clothes off the Wolf and left the shack, taking the still full jug of water with her. “I’ll be taking her clothes and burning them, since there’s no body to cremate.”

But with the taste of meat still fresh on his chops, the Wolf couldn’t resist. With Little Red’s back turned, he pounced and ate her whole, shotgun and all.

“How can Wolf have good-good munches weethout good-good water?” The Wolf went to the spout on Little Reds tanker and started ravenously drinking.

The last thing the Wolf ever heard was the muffled cock of a shotgun from within his stomach.

Instantly, the entire top half of the wolf exploded, spattering fur and gore across the side of the tanker. In the remains of the Wolfs lower half sat Little Red covered head to toe in red which matched her scarf; Her smoking shotgun clutched in her hands.

“I guess the stories were right. The Wolf won’t think twice before eating you whole. At least now no one else will have to worry about such a fate. And now I know of a fresher water source to boot!” So after burning her grandmother’s clothes under the shadow of the water tower, Little Red rode home to her parents, eager to gather a crew to build a new windmill at the oasis.

In the deserts of the American wasteland, every living being is always hungry, always thirsty. There is no time to cower from mutated wolves, or worry about dead grandmothers.