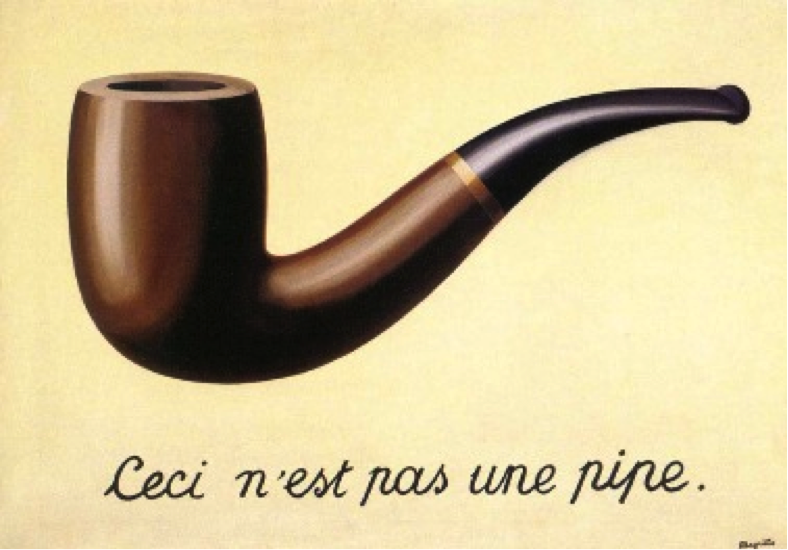 (The Treason of Images – René Magritte)

The first time I saw this painting of the surrealist artist René Magritte I was in my last junior high school year. It provoked a lot of confusion in me. It has nothing but a pipe with a sentence below it saying “Ceci n’est pas une pipe” (Translated: This is not a pipe). Well…why on Earth is that not a pipe if what I see is indeed a pipe? At first I tried to decipher an inexistent hidden meaning trying to find camouflaged shapes that proved why that was not a pipe. It gave me quite a headache, and a few years later I saw the same painting again in a slide show my French teacher uploaded to the course’s website. I was very frustrated so I asked directly to my professor: WHY IS THIS NOT A PIPE? He proceeded to explain to me the whole philosophy behind René Magritte’s surrealist art, but before I jump into details I can get you started by making you realize that this is indeed not a pipe: it is actually a painting of a pipe.

Magritte was born in Belgium in 1898. He met Andre Breton, one of the founders of the surrealist movement, in 1927 (Renemagritte.org). Putting those years in historical context we are looking at a generation that was living the end of The Great War (World War I) and moving toward the beginning of World War II. The general feeling among people was of uncertainty. There was optimism with the end of the war but a big depression as well for the instability it left. At the same time it was an era of new developments in science theories such as quantum physics and psychoanalysis, especially the work of Sigmund Freud (Chamorro Benet). It was a world of things that didn’t make sense, but it gave a new dimension to the ways of looking at it, most importantly questioning reality through this clash of events. The world gave birth to the concept of being surreal.

Magritte’s art has something in common with the rest of the surrealist artists: his art is the juxtaposition of elements that together won’t make a rational sense, but the value of its interpretation lies in the reaction of each spectator’s mind toward the relation of those elements. Magritte’s approach is more conceptual. He exposes how we define things by the word we use to name them creating a word-image series of conflicts. For instance, we think we know what a shoe is because of the definition we give to the word. But what if we replace the name shoe for “moon”? That is what Magritte does in his painting *“La Clef des Sognes II” (1930). We see six simple objects and below them it is written a word apparently unrelated to the picture above it, forcing the viewer to think about this relation we have with what we see and what we know. Just like in his painting of “The Treason of Images”, Magritte is trying to show how it doesn’t matter how we name the object, the word will never be one with the object’s physical reality. In general, 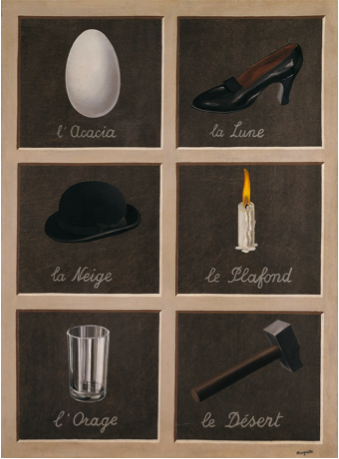 *La Clef des Sognes II – René Magritte
Source of image:
https://surrealismepsychanalyse.wordpress.com/tag/rene-magritte/
not only he made this observation through these types of images, but also he usually gives a title for his paintings that has nothing to do with the literal things you see in the image.

Magritte published an article in the surrealist journal La Révolution Surréaliste entitled “Les Mots et Les Images” (Translated: Words and Images), where he expands on the conflict he presents on “The Treason of Images” (Dingemanse). Here are some of his observations and illustrations:

– An object doesn’t depend that much on its name, therefore one can find another one that suits it better. (Translation: Le Canon = The Gun)

– A word can take the place of an object in reality (Translation: Le Soleil = The sun)

– An image can take the place of a word in a sentence.
(Translation: The ★ is hidden by the clouds.)

– Everything tends to make one think that there is little relationship between an object and the thing that represents it. (Translation: The real object / The represented object.) 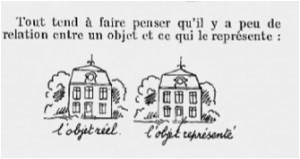 – In a painting, words are of the same substance as images

– We see the pictures and words in a different way in a painting.

– An object never has the same role as its name or its image.
(Translation: Cheval = Horse) 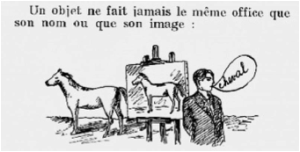 -Visible contours of objects in reality touch as if they were a mosaic. 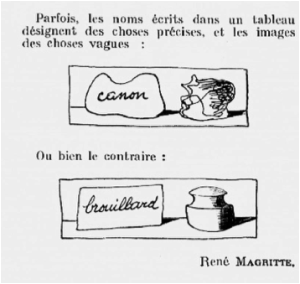 The initiator of these observations was the Polish-American scholar Alfred Korybski. He most likely influenced Magritte’s art. Korzybski said “The Map is Not the Territory”. What he means is that the territory is the world and the map a generalization we use to make sense of it. It also proposes that we don’t have unmediated contact with the external world/reality (Expand your World). Korybski saw that language was at the same time the thing that made possible cultural development of the human race and at the same time the one that harmed it’s perception (Expand your World). When we communicate an experience, we often use generalizations in our words, and those generalizations leave out the things that made that event unique; they leave out the concrete experience, which results in a small abstraction of things out of a whole (Expand your World). Korzybski used various methods to reveal the levels of abstraction in play. One illustration he used in his lectures was to point to a chair and announce, “This is not a chair.” With this he was demonstrating that the word “chair” is not the object where we sit. (Expand your World)

Magritte brought through his art the reflection of the new perception of reality that was being discussed in the philosophies of his time. He questions reality through this conflict of words and images. The pipe might only be the painting of a pipe, but immersing into his concept creates even bigger philosophical questions. He is interested in the mystery of this relation and leaves an open answer to it.

Special thanks to my French professor Jean Ferras, who introduced me to the world of René Magritte.

Why this is not a pipe